Exuding confidence in the wake of spectacular performance, Chairman of National Agricultural Cooperative Marketing Federation of India Ltd. (NAFED), Bijender Singh announced a dividend of 15% during the AGM to the joy of its thousands of shareholders.

The AGM was held at the NCUI headquartered in New Delhi on Friday, in which the entire board of Agri Co-op was present. The NCUI auditorium was also filled with delegates along with several centres across the country connected through video-conferencing.

It was the 64th AGM of Nafed, which has seen many ups and downs in its history. Ever since its fortunes turned around due to a bailout intervention by the Modi govt five years ago, Nafed has been on a growth path led by a dynamic MD and a supporting Board chaired by Bijender Singh. The latter noted that during 2020-21 Nafed has achieved a turnover of Rs 36,894.95 crores with a net profit of Rs 243.89 crores. 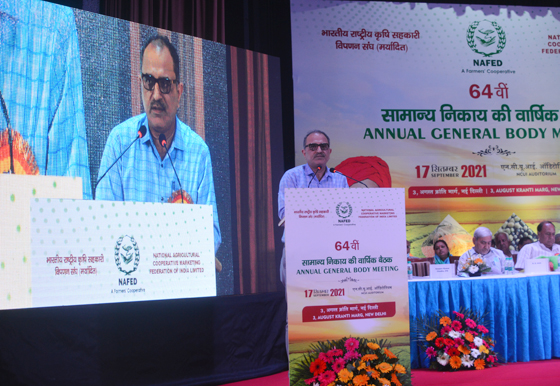 The fact that Nafed is growing, was evident from a statement of the Chairman when he informed that till the last year delegates were given fare of three-tier ac but from this year onwards the fare of two-tier ac would be given. He also said that the 15% dividend is the highest given by Nafed in its history. “I am sure very soon we would be giving 20%”, he added.

On this occasion, Bijender also lauded the Board and Nafed employees for their tireless efforts to take Nafed to this height. He mentioned the name of the MD for his dynamism and giving an example of his selflessness, informed the audience that MD Sanjeev Kumar Chadha has returned the incentive of Rs 51 lakh given to him by the Board last year. “While respecting the Board sentiments, Chadha Saheb has rededicated it to the Organization”, stated Bijender.

The Nafed Chairman also traced the history of Nafed and thanked those who played a role in its revival. He thanked Dileep Sanghani, Mohanbhai Kundariya, and Prime Minister Shri Narendra Modi, among others. He also thanked Narendra Singh Tomar, MoS for Agriculture, Kailash Choudhary, Purushottam Rupala, Secretary (A&C), Additional Secretary (A&C), and other senior officers in the Ministry of Agriculture and Farmers Welfare and the Ministry of Food, Consumer Affairs and Public Distribution for their constant guidance and support to NAFED from time to time and reposing confidence in NAFED by entrusting various tasks. 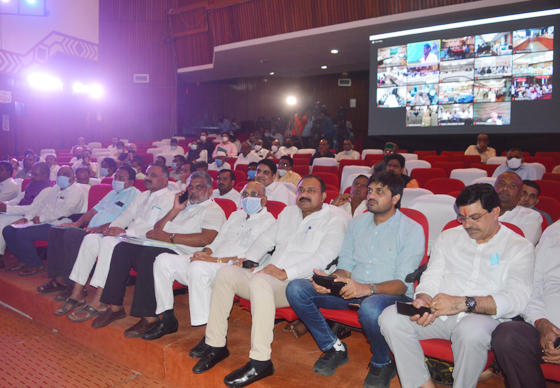 passed without hassle. Giving a brief report of Nafed’s activities the MD said that an effort to cut down Nafed’s dependence on procurement is going on and very soon half of its business would be independent of procurement. We have to diversify within the agro-business ecosystem while remaining careful about not repeating the past mistakes, underlined Chadha.

Chadha informed that due to good performance over the past 4-5 years, Nafed’s Net Worth has become positive and it is now eligible for bank loans up to Rs 2800 crore. He also exhorted co-op societies which are members of Nafed to take maximum benefits from the Agri infra Fund. “Nafed will prepare DPR for you, Nafed will upload your applications on the website; you have only to identify what you want to do” Chadha said to the assembly.

Dr Chandra Pal Singh Yadav and Dileep Sanghani also spoke on the occasion. Nafed Vice-Chairman Sunil Kumar Singh proposed a vote of thanks in his typical style which was a blend of humor and wit. Nafed Additional MD Sunil Singh anchored the proceedings efficiently.