Mukesh Dalal, the newly elected Chairman of Surat People’s Cooperative Bank revealed his future plans while talking to Indian Cooperative. “We are eyeing to achieve a deposit base of Rs 10k crore in the span of three years. And we will also open 10-12 branches in the near future”, Dalal said.

Readers would recall that recently Dalal and Sunil Modi have been elected unopposed as the President and Vice-President of the bank. Dalal and Modi replaced Ashit V Gandhi and Sanjiv N Tamakuwala respectively. The term of the board will come to an end in 2023.

“For the first time I have become the Chairman of the bank and I am thankful to the board of directors who reposed faith in me. I will meet their expectations.Our bank is completing 100 years of its existence next year, we will celebrate it with full gusto and enthusiasm”, said Dalal who is also the General Secretary of Surat City Bharatiya Janata Party.

We will upgrade the existing technology soon. In a bid to make our presence felt on social media, we will make  bank’s accounts on social media platforms like Facebook, Twitter, Instagram etc”, Dalal underlined. 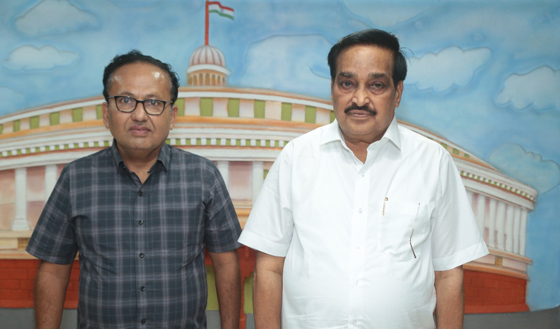 “Our plan is to merge 2-3 branches of the bank in a couple of months. We are organizing a brainstorming session with branch managers and others on the expansion of our business”, he said.

As soon as Dalal became the Chairman of the bank, scores of his followers on social media congratulated him. He also met the Gujarat BJP State President C R Patil. Sharing this through social media Dalal wrote, “After becoming the President of The Surat People’s Cooperative Bank, the largest urban co-operative bank in South Gujarat, I paid a courtesy call on the State President of the Bharatiya Janata Party, CR Patil Saheb, and received his blessings”.

This year also the bank was able to maintain the net NPA at Zero level. The bank earned a net profit of Rs 32 crore, which is higher in comparison to the 2019-20 FY. In eight branches of the bank e-Lobby began operating.

The bank has a network of 30 branches, in Gujarat and Maharashtra.