The resilience shown by cooperatives across the world during the Covid-19 has demonstrated that it is cooperation and not competition that can lead to economic growth, social solidarity, and sustainability, said Dr. Ariel Guarco, President of International Cooperative Alliance (ICA). Gaurco was on his second visit to the National Cooperative Development Corporation (NCDC) headquarters in New Delhi on Monday.

“This crisis of Covid-19 has shown that we need to cooperate and work towards a new world where there is gender equality, peace, and growth,” he said while praising the efforts of the cooperatives in India which he said have been an instrument of change over the years.

Guarco said that opening up of the new Ministry exclusively for cooperatives also opens up new opportunities and possibilities for the sector. Asserting that the governments should promote cooperatives, Guarco who is himself a cooperator from Argentina assured all help to the cooperative sector in India through the global alliance. The cooperative movement is made of over 3 million cooperatives with a total membership of approximately 1 billion people worldwide from all sectors and regions, he underlined.

Welcoming the ICA President, Sundeep Kumar Nayak, Managing Director NCDC said that the Ministry is looking towards ICA’s support in three areas including assistance in setting up a center on global best practices in cooperatives in India, boosting exports between cooperative to cooperatives (C2C) and a special session for new cooperatives at the world cooperative meet to be held a few months later in Seoul.

Speaking on the occasion, Dr. Chandra Pal Singh, President Krishak Bharati Cooperative Limited (KRIBHCO) said, with the formation of the new Ministry, the government is keen to work on “Sahakar se Samriddhi” and NCDC by providing loans is helping in the development of the cooperatives and hence to the poor people and farmers at the grassroots level. He expressed hope that with the establishment of the new Ministry, cooperatives will gain newer heights.

Echoing similar views, Dileep Sanghani, President of the National Cooperative Union of India (NCUI) said that the new Ministry would help strengthen cooperatives across the country but at the same time he could not help praising the NCDC MD’s efforts in promoting cooperatives as a corporator himself. Sanghani too felt that the youths of the country need to be encouraged to see co-operative as a futuristic model of growth and prosperity. 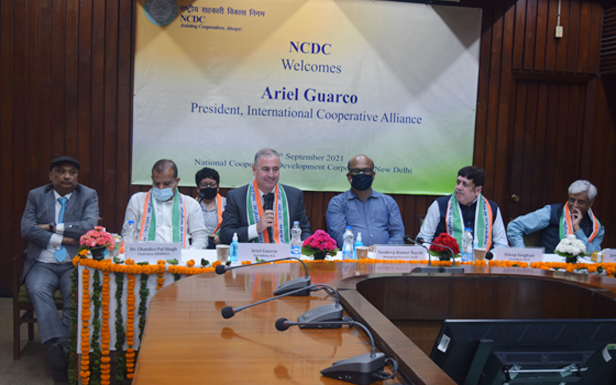 “Cooperative should be taken up as a movement so that local people are economically empowered to attain the dream of Atmanirbhar Bharat,” he added.

Jyotindra M Mehta, President, The National Federation of Urban Cooperative Banks and Credit Societies Ltd. (NAFCUB) touched upon tax-related issues in the sector in India and was keen to know the benefits and disadvantages faced by them because of levying of taxes.

Nayak later shared with the ICA President the details about the functioning of the Corporation and that how various schemes launched by the NDA Government in the past few years aim to put cooperatives center stage in making India a USD 5 trillion economy.

NCDC has recently taken many other initiatives such as Yuva Sahakar, Sahakar Mitra, Ayushman Sahakar, Sahakar Pragya, etc., to address the needs of cooperatives operating in various sectors.