Mega conclave to host 2500 co-operators from across states & sectors

by Ajay Jha
in IFFCO
1

The much-touted cooperative conclave chaperoned by the apex body NCUI and scheduled for September, got the greenlight from the newly appointed Union Cooperation Minister Amit Shah on Tuesday.

The duo of NCUI President Dileep Sanghani and IFFCO MD Dr U S Awasthi visited the Minister at his residence and sought his time for inaugurating the mega co-operative conclave, slated to be one of the biggest shows in recent past.

“Amitbhai has accepted our invitation and it is final now. The conclave would take place on 25th September at Indraprastha Stadium”, said Sanghani to Indian Cooperative.

“On the very first day of his joining the Ministry, we had requested Amitbhai for the same and today we zeroed in on a date (Sept 25th) that would suit him”, added Sanghani who reached Gujarat Tuesday evening, after a hectic Schedule in Delhi.

The proposed coo-operative conclave would be grand as it would consist of co-operators from all the levels- tehsils to zila to state to nation. This will help Amitbhai in knowing the cooperative people from close quarters as well as give co-operators a chance to know their Minister”, said Sanghani.

NCUI, which has already begun the preparation for the conclave, is tasked with preparing the list of cooperatives and co-operator active in different sectors of co-op business across states.

IFFCO on the other hand will take care of its logistics. Credited with conducting one of the largest AGMs year after year, it would not be a big deal for us, said an IFFCO official. 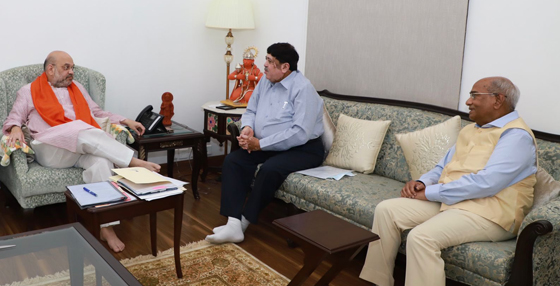 The event, which is expected to host more than 2500 co-operators, would be held in the Indraprastha Indoor Stadium, informed Sanghani.

Tweeting about the meeting IFFCO MD wrote “Today, I, along with Sh. @Dileep_Sanghani, Vice Chairman, #IFFCO met Hon’ble Union Minister of Cooperatives & Union Home Minister Sh. @AmitShah Ji. We interacted with him regarding the future path & guidance for growth & development of #cooperatives in the country.”

In his telephonic conversation with the Indian Cooperative, Sanghani also said that Nano Urea also figured in the conversation with the Minister. “We informed him what a huge response Nano is receiving from the farming community and how difficult it is becoming for us to supply them without losing time”, stated Sanghani.

Indian Cooperative gathered that after the meeting of Sanghani and Awasthi, the ICA AP Regional Director also met Shah. Balu met Shah separately. We are awaiting the details of the meeting.