MD encourages use of technology in farming: Kumar

The global fertilizer co-op titan IFFCO has grabbed the media headlines by employing drone services in sprinkling Nano urea in paddy fields. Though no formal press release was issued, IFFCO MD’s tweet on the subject, attracted kudos from netizens.

On Monday Dr U S Awasthi tweeted “IFFCO always puts technology first to create innovative solutions for farmers. IFFCO Agri experts are showcasing the use of IFFCO Nano Urea with drone in a paddy field in Kerala. Big applause for Yogendra Kumar & his entire marketing team.”

On enquiry, it was revealed that IFFCO has been experimenting with the idea of using drones for the last 5 months. “We have already done so in the paddy fields of Maharashtra a few months ago with amazing results”, added an agriculture expert connected with IFFCO on condition of anonymity.

The idea is at the nascent stage and inputs are being collected for the final launch the information about which would be communicated through formal means, he said adding Bihar may be the place to inaugurate the Drone-Nano Urea project.

Elaborating on the Project, the IFFCO official said that wherever we have sprinkled Nano Urea along with Sagarika, the outcome has been better than expected. The experiments have so far mostly taken place in South India as there are many private drone-operating agencies available in that part of the country.

A few months back, drones were employed in sprinkling Nano Urea and Sagarika in fields behind Indira Gandhi National Airport in Delhi. “We have kept low profile so far as many loose ends are yet to be tied up”, he stated. 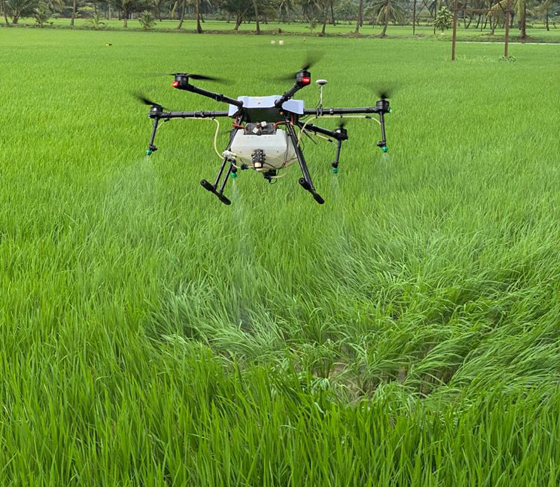 “Interestingly, the use of drones has multiple benefits for the farmers. First it reduces the use of water and second it stops all manual intervention. It is also close to the vision of our MD who wants increasing use of technology in farming”, said Yogendra Kumar, who was lauded by the MD in his tweet while breaking the news.

Meanwhile, scores of netizens lauded IFFCO for its novel experiment. Amar Sinha wrote Congratulations to you and IFFCO for this breakthrough in an area of critical importance and persisting dependence on imports. This is a real breakthrough for MakeInIndia

One Shashank Mishra wrote “Using drones in Indian Agriculture is like a dream come true. #IFFCONanoUrea brought the change to Farmers life and earnings. Hats off to Guidance of Dr U S Awasthi and efforts of marketing team”.

Ever since IFFCO has come up with the liquid Nano Urea, there has been widespread appreciation of co-operative sector’s contributions to the nation’s economy in general and that of IFFCO in particular.