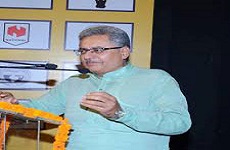 The cooperative future of Ashok Dabas, the high profile cooperator hinges on today’s election. His membership to NCUI’s Governing Council as well as his office in the apex body may get shaky if loses at the NLCF election.

The portents are not promising though. Cooperators were tight-lipped to speak a word so far as Dabas chance of re-election mattered. While outgoing Chairman Sanjiv Kushalkar said he is keeping his cards close to his chest, another Director Mr Sagwan, Indian Cooperative talked to, was not sure about anything. The Managing Director R M Pandey with whom Dabas picked up a never-ending fight, refused to utter a word.

“I fall into unnecessary controversy. I am not an elected head….please do not ask me”, an agitated Pandey reacted to Indian Cooperative query on the issue. But , sources say that Pandey is ready to move the mountain if it can stop Dabas from entering the Board once again.

Dabas himself sounded pessimistic. They sometimes say “yes” and sometimes say “no”…. I have no clue as to what is going to happen, he shared with Indian Cooperative. But he seeks satisfaction from the fact that BJP govt has come to power in the Centre. Dabas is associated with the cooperative cell of BJP.

On the question of him seeking govt nomination on the NLCF Board, Dabas said it does not suit his stature. I nominate people to Board and seeking something for myself is not proper.

Whatever be the case but it is true that Dabas future is closed in the fist of outgoing Chairman Sanjiv Kushalkar who is said to wield considerable clout in the federation and make or mar future of any cooperator.