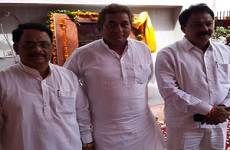 Monday is going to witness a fierce fight among cooperators to elect the new Board of National Labour Cooperative Federation (NLCF). The outgoing Chairman Mr Sanjeev Kushalkar has been camping in Delhi for the last 7-8 days to give the final touches to the battle strategies.

But Mr Kushal kar is too tight-lipped to share any detail. “Wait till evening the news will travel to you on its own”, he said to Indian Cooperative. But several labour cooperators, Indian Cooperative talked to, were unanimous on Kushalkar’s re-election as the next Chairman.

There are many new delegates this time but that would not make a big difference. I know each one of our delegates both as cooperator and on personal basis, Kushalkar told this correspondent. There were some hindrances though, as vested interests did not want me to interact with my delegates in one or two states but being a grass-roots worker no one can stop me, Kushalkar said with passion.

I do not have any political ambition and my sole concern is NLCF and NLCF alone. As my father started this organization I nurse it with my sweat and blood. In the next five years I would move across India and connect to each and every primary labour cooperative, Kushalkar said enthusiastically.

But he is a little foxed by the prevailing Delhi’s politics. People say one thing and do just the opposite. But worry not, I have my own way of handling the situation, he said.

Indian Cooperative has learnt that majority of the outgoing Directors are going to be re-elected barring a few exceptions. On Ashok Dabas, Kushalkar kept mum and said wait.

Talking to Indian Cooperative Dabas said he has no inkling as to what is going to happen. I wanted to withdraw but due to other engagements could not meet the deadline of withdrawal of nominations. But I do not worry as govt is ours and we can do a lot in the cooperatives in the days to come, Dabas added.

There are about 11 contestants for 7 posts in labour cooperatives and a keen contest is likely to take place.

About 151 delegates from labour cooperatives and 31 from that of forestry are going to cast their votes to elect 11 directors of the National Labour Cooperative Federation on Monday in N Delhi.