by Rohit Gupta
in Featured, Sugar
0

The apex body of Sugar cooperatives- National Federation of Cooperative Sugar Factories (NFCSF) held its 60th AGM in the NCUI Auditorium in New Delhi on Wednesday where its board members urged participants to divert as much sugar as possible to ethanol. The AGM resolved to export at least 70 lakh tonnes of sugar annually.

But the AGM was a bit of a disappointment for the participants as tall claims of biggies gracing the function proved to be a lie. In its invitation NFCSF said that Union Ministers Nitin Gadkari and Ramvilas Paswan and a Minister of State Dadarao Danve as well as former Agriculture Minister Sharad Pawar would come. But nobody came from this list.

However, the auditorium hall was packed with participants who had come across from various parts of the country to listen to ministers.

In his presidential speech, NFCSF Chairman Dilip Walse Patil said, “As we all know, the new sugar season which is barely 2 months away is going to be the most challenging one. With the opening sugar stock of 145 lakh ton & expected production of 285 lakh tons, the total availability of 430 lakh ton is setting a new record in the history of India’s sugar sector”, he added. 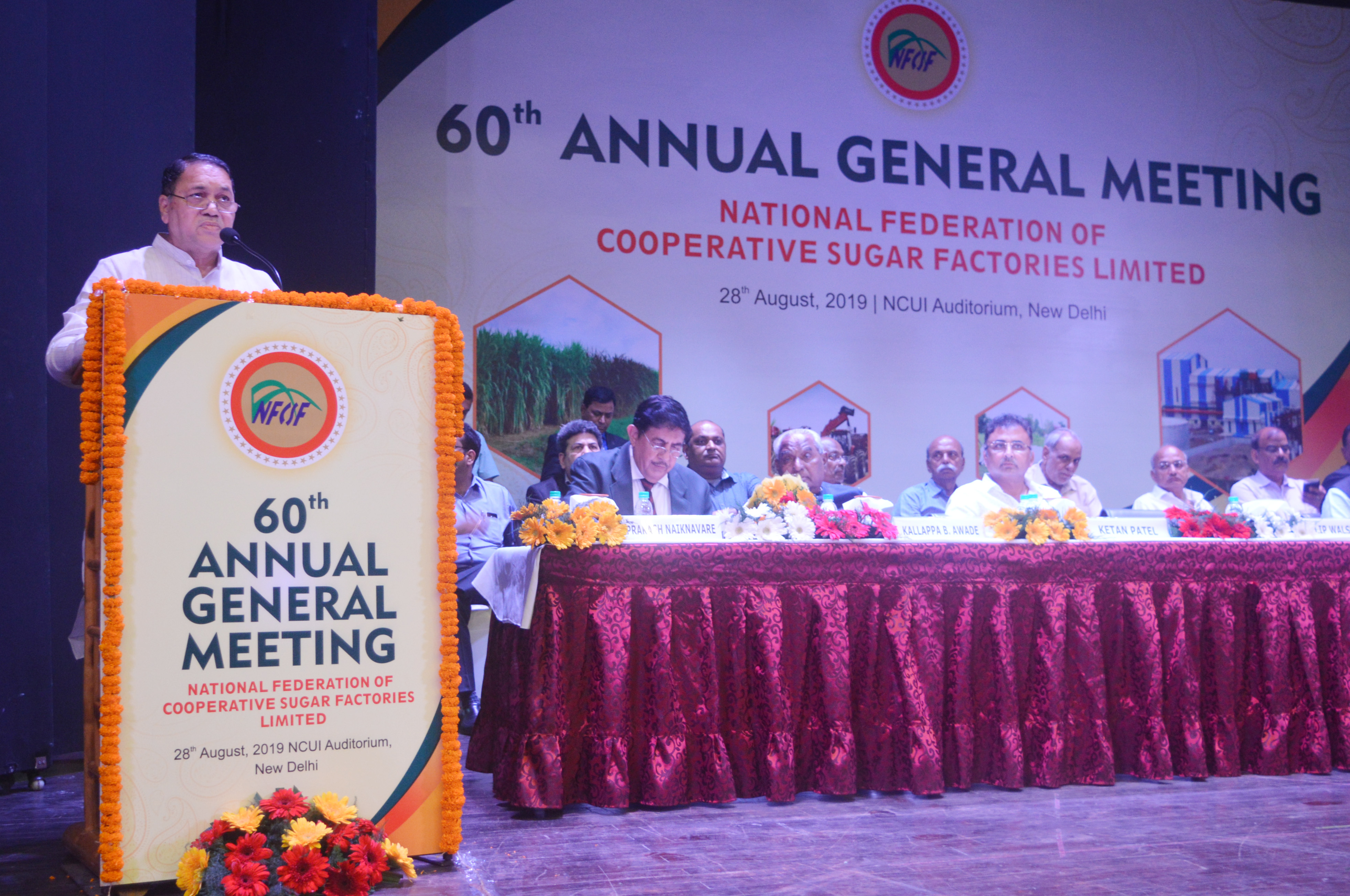 “Divert as much sugar as possible to ethanol and I am hopeful the GOI will soon come out with robust policies on allowing conversion of sugar stock into Ethanol & offering enhanced purchase price for ethanol. Besides this, 70% of MIEQ of sugar during the current year has successfully been done by the cooperative sector despite a challenging situation”, he said proudly drawing a big round of applause from the audience.

Patil informed that we have requested GOI for the creation of Price Stablization fund which will help industry whenever there are ups and downs in the market. Another thing looming large is the Anti Sugar Campaign which has potential to seriously impair sugar consumption & thereby push the sector towards financial sickness”, Patil lamented.

Besides, there is another important issue pertaining to sugar MSP. I request DFPD to kindly compute all finance costs including depreciation in re-fixing sugar MSP so as to bring it at par with average cost of production, he underlined.

Commission for Agricultural Cost and Prices (CACP), Chairman Prof Vijay Paul Sharma who had been invited as the Chief Guest said, “Sugarcane farmers are not happy with the current scenario as well as sugar factories are not financially good. So we have to create a way and make a long term policy. Production is increasing but a stagnant consumption is creating a problem”, he said.

He urged participants to diversify their business into other activities like sugar to ethanol, inter-cropping of pulses, oil seeds etc. Maize is also good for ethanol production.

Efficiency Awards were given in several categories on the occasion. A vote of thanks was proposed by the vice-chairman.