by Rohit Gupta
in NAFCUB
0

Mukund Abhyankar who is seen as the chief architect of the Opposition Panel has denied charges of spearheading any panel saying that he has joined the team of Manam Anjaneyulu and Raghvendra Rao as they are trying to make the NAFCUB Board truly representative by nominating one person from one state.

“I liked the idea and I joined them and as such I am not very active canvassing or campaigning”, he stated. He also said that he is in the fray as his bank’s board decided to field him in the election.

Denying charges of inciting Mukesh Gajjar against Mama (Jyotindra Mehta) Abhyankar said that Gajjar always wanted to contest and contest from Mama’s panel but Mama refused to give him a chance. If somebody wants to contest from the other panel what is the harm, he asked.

Referring to Maharashtra, Abhyankar said that Jyotindra Mehta has fielded a socialist Dattaram Chalke at the cost of his own men, who are unhappy now. What can I do if you are not able to hold your flock together, he charged.

Regarding West Bengal and Samantha, Abhyankar was sheepish and said that I do not know much. “I have come to know that his nomination has been challenged by their advocate Rajappa; lets us see”, he said.

“I have documents to prove that it was Mudit Verma who went to court and derailed the election in 2010-11. And Verma stands with them now”, Abhyankar said defending the Bijnor candidate Shankar Lal Jat.

”They accuse me of supporting privatization but the fact is they have never raised their voice when it comes to opposing the govt”, Abhyankar said in the context of proposed amendments in the MSCS Act which argues for return of share at a higher value whether it is book value or face value. UCBs have traditionally been dealing with face value and the govt move is aimed at weakening the co-op movement, he stated.

Referring to Mama’s Sahakar Bharati connection, Abhyankar said “they are political entities and I am purely a cooperative person; I do know either Congress or BJP”, he concluded. 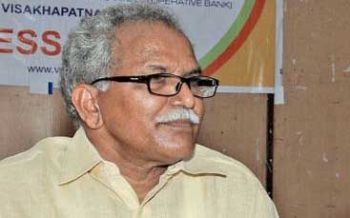 entire outgoing leadership of Nafcub had been busy with internal fights and this situation persisted for more than 4 years. Nafcub has spent most of their time and resources in avoidable litigation’s and court cases” he said.

“As there are 1551 UCBs in country and out of which 930 banks are Nafcub members in which majority of them are not paying annual subscription. Only at the time of elections, because of pressure of local leaders some of them clear their subscription arrears”, he accused the leaders of the outgoing board.

“Nafcub leadership in the last five years has not initiated any steps to activate the non-participating UCBs. Moreover, issues of concern to individuals UCBs are not taken up at all against the letter and spirit of Nafcub’s Byelaw (Section 4 b). To add to the dissuasion, annually subscription rates are increased and because of these UCBs are reluctant to join Nafcub”, Rao asserted.

Surat People’s Cooperative Bank’s Mukeshchandra N. Gajjar said, “I had requested Mama (Jyotindra Mehta) to give me a seat in his panel but he said there was political pressure on him to take the leaders of Sahakar Bharati in the panel. Then I decided to opt out and joined hands with the cooperative panel”.

Gajjar further said, “The Mehta panel consists of banks which are having a paltry business mix of around Rs 100-150 crore while we are the largest bank of South Gujarat having a business mix of about Rs 7,000 crore”, he claimed.

It bears recall that the NAFCUB board comprises of nearly 23 members, out of which nineteen (19) directors will be elected. The urban cooperative banks have 7 seats.

What the Union Budget 2019 means for co-op sector