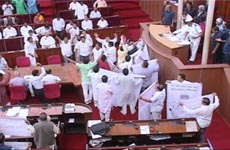 Once again, the Odisha govt is in the dog house with the opposition parties in the state. The govt. has passed the Odisha Cooperative Societies’ Amending Bill 2014 in the Assembly despite their fierce opposition.

The bill has taken the place of the ordinance promulgated earlier postponing the cooperative elections by six months. The state cooperation minister Damodar Rout has defended the passage of the bill arguing since the 18th months’ time for holding the cooperative vote had come to an end, the new legislation will validate further extension of time.

It deserves repetition that the BJD govt. in Odisha has gained notoriety for repeatedly stalling the cooperative elections in the state on specious grounds.

Meanwhile, the Odisha Cooperative Election Commission has issued notification announcing dates for holding elections to 9,733 primary cooperative societies of the State. The vote will be held in two phases, January 18 and 25 next year, a notification recently issued by the Commission said.