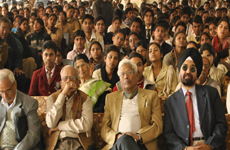 We saw some less important areas of New Model bye laws in part one. Part two has serious allegations against this Model. When Model 2104 is submitted to register as Bye-Laws of a society in place of its existing registered Bye-Laws the Registrar is duty bound to  verify that “the proposed by-laws are not contrary to this Act or to the rules” (Section 9 (1) of the M C S Act 1960 ). In this Part we will see how inconsistent the Bye-Laws are with reference to Constitutional Mandates as laid down under 97CAA.

Subject to the provisions of this Part, the Legislature of a State may, by law, make provisions with respect to the incorporation, regulation and winding up of co-operative societies based on the principles of voluntary formation, democratic member-control, member-economic participation and autonomous functioning

Notwithstanding anything in this Part, any provision of any law relating to co-operative societies in force in a State immediately before the commencement of the Constitution (Ninety-seventh Amendment) Act, 2011, which is inconsistent with the provisions of this Part, shall continue to be in force until amended or repealed by a competent Legislature or other competent authority or until the expiration of one year from such commencement, whichever is less.’

The last Article provides in effect, that after 14 2 2013 any provision of any law relating to co-operative societies in force, which is inconsistent with the provisions of this Part,(“Part IXB: The Cooperative Societies”) shall dease to have any force.

B.Bye-Laws inconsistent to Constitutional Mandate are discussed herein after:

a.As per the Constitution – Article 243ZH(a)“authorised person” means a person referred to as such in article243ZQ;

“(2-A) “authorisedperson”means any person duly authorised by the Registrar to take action under the provisions of this Act;”;

c.As per Bye-Law No 3 (xxix.) ‘Authorized Person’ means a person duly authorized to take action under the provisions of this Act.

d.In the M C S Act 1960 this term has been misused to empoer the Registrar to appoint a constitutionally banned Administrator to manage the C H S.

2.Reservation of Seats on the managing committee :

a.Bye-Law No 114 requires 3 seats to be reserved based on casts as provided under Section 73B as against the Constitutional Mandate of only 1 seat vide Second Proviso to Article 243ZJ that is to say QUOTE: “Provided further that the Legislature of a State shall, by law, provide for the reservation of one seat for the Scheduled Castes or the Scheduled Tribes and two seats for women on board of every co-operative society” UNQUOTE

b.Where no member comes forward to contest reserved seat, it should revert to general category by interpretation of the “Reservation Policy” but by not clarifying this interpretation a confusion is left to management to handle.

c.About Reservation Law following pistion is legally correct interpretation which may be followed with no risks:

i.Where Reserved category is empty in terms of membership i.e. a society has no women as members the Reserved Seats become General category.

ii.Where no member is ready to contest or co-opted the vacancy reverts to general category.

d.Interpretation as per c above is justified this way. In case of a C H S having less than 100 members the strength of the managing committee is 11 in which 5 seats are reserved. Quorum is 6 number which is equal to General Categry strength. If Reserved category membership ishaving no member at all who will join the Committee? If none the quorum  will be 100% strength. This can not be the intention.

3.Casual Vacancies: Bye-Law No 128 QUOTE: The Committee may fill a casual vacancy on the Committee by nomination out of a same class of Active Members in respect of which the casual vacancy has arisen as per section 73 CB and as per the instruction issued by State Co­operative Election Authority UNQUOTE

i.A proviso to Article 243ZJ(1) inserted in the Constitution of India vide 97CAA has a mandate: QUOTE:Provided that the board may fill a casual vacancy on the board by nomination out of the same class of members in respect of which the casual vacancy has arisen, if the term of office of the board is less than half of its original term. UNQUOTE

ii.Every State was supposed to incorporate the above in their cooperative society acts or else the above shall prevail over anything contrary.

iii.The M C S Act 1960 has a new Section about elections namely 73CB. It Sub-Section (1) reads QUOTE: The superintendence, direction and control of the preparation of the electoral rolls for, and the conduct of, all elections to a society  shall vest in the authority called as the State Co-operative Election Authority’, as may be constituted by the State Government in that behalf. Every general election of the members of the committee and election of the office-bearers of a society including any casual vacancy, to the extent applicable, shall be held as per the procedure prescribed.  UNQUOTE

iv.The Act provides that a casual vacancy, shall be filled upas per the procedure prescribed and that is as under as per the Society Election Rule No 74  quote In the event of vacancy occurring on account of ……….. or otherwise, the Chief Executive officer of the Society shall forthwith communicate the occurrence of such vacancies to the SCEA and the vacancy shall be filled as soon as conveniently, according to the provisions of the Act.

a.Delete definition clause ‘Authorized Person’ means a person duly authorized to take action under the provisions of this Act. from Bye-Laws when submitted for registration.

b.Add following Explanation to Bye-Law No 114 as under:

It is clarified that Reserved Constituencies shall be treated as General in the event of there being no representation of this category in any election.

c.Add following Proviso to Bye-Law No 128:

Provided that a casual vacancies arising after expiry of half the tenure of the committee in office shall be filled up by co-option of members from the corresponding constituency.