Sudhakar Chowdhary is the new Vice-Chairman

Dr Chandra Pal Singh Yadav, an ace co-operator of the country and Vice-Chairman of ICA Asia-Pacific was re-elected Chairman of the second largest fertilizer cooperative Kribhco unanimously in an otherwise keenly contested election on Thursday in Delhi. Yadav is also a Rajya Sabha member.

Sudhakar Chowdhary, a co-operator from Andhra Pradesh and a member of the outgoing board was elected as the Vice-Chairman of Kribhco. While Biscomaun Chairman Dr Sunil Kumar Singh proposed Chandra Pal’s name, it was Nafed Chairman Bijender Singh who proposed the name of Sudhakar Chowdhary.

Returning officer B B Srivastava asked all the newly elected Board members if they wish to file nominations for the two top posts but there was total unity among the members on these two names-Chandra Pal and Sudhakar.

The peaceful and transparent election process also had its quota of surprise when the old man and Guru of the winning panel – V R Patel lost at the hands of BJP supported candidate Maganbhai by a margin of 48 votes. 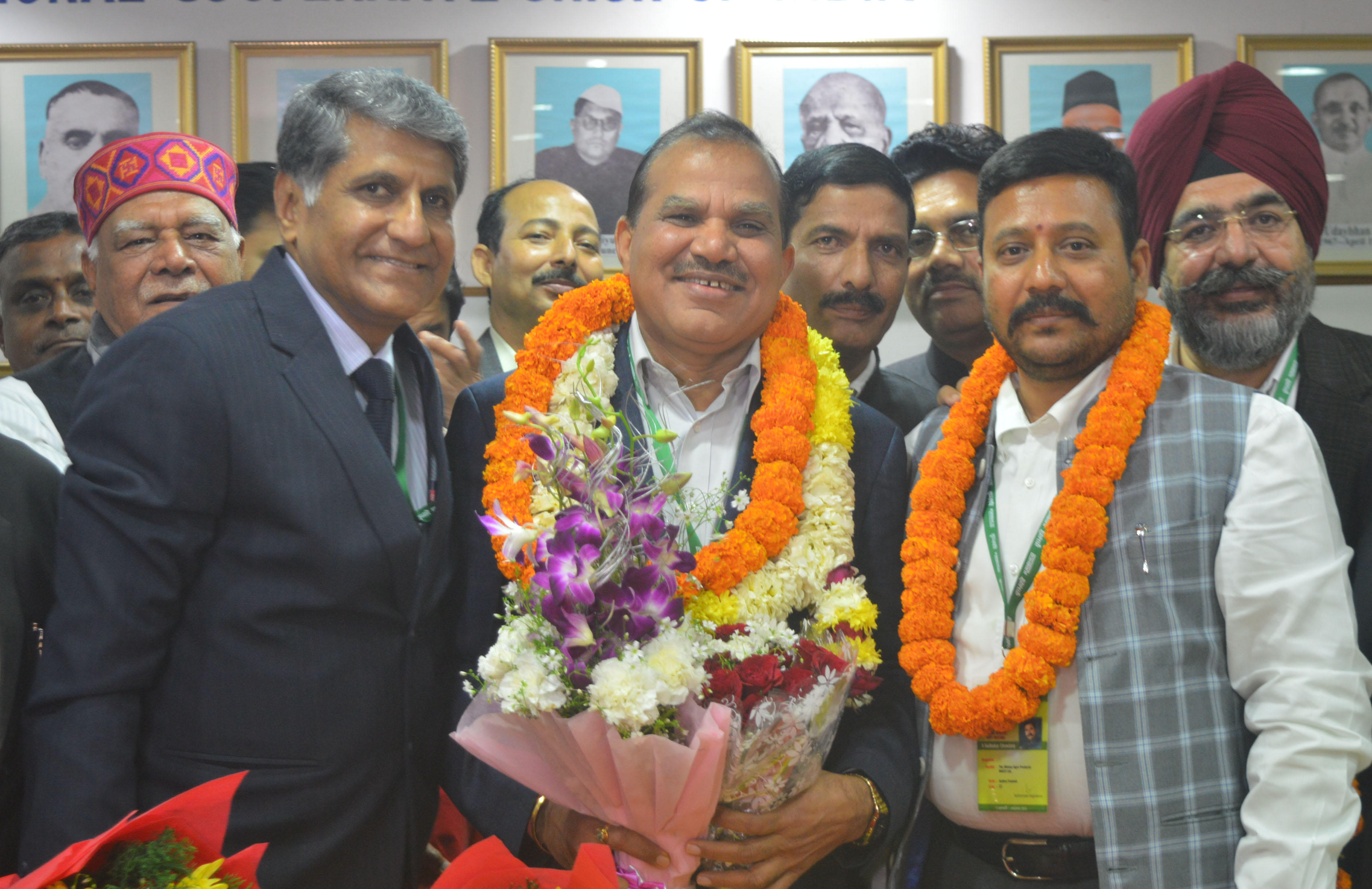 But the grand victory of Chandra Pal lifted the mood of the group as people rushed to greet him with a bouquet of flowers as soon as the Returning officer declared him victorious. Chandra Pal’s popularity was noticeable in the NCUI Board room where people not only from Kribhco but also from other co-op bodies lined up to greet him.

The Biscomaun team led by its Chairman had got a special garland made of famous Mithila’s dry fruit- makhana- on the occasion for the newly elected Chairman and his deputy. People of other regions including Andhra, Karnataka, Gujarat also came one by one to the greet the winners. The NCUI officers also were not far behind in wishing Chandra Pal as he also happens to be their President.

new Chairman for the same.

Since morning the NCUI campus wore a festive look as hundreds of co-operators could be seen waiting for the results of voting going on at the 2nd floor of the Auditorium. The returning officer had taken extra-precaution and employed CCTVs and video-recording to make the process fair and transparent. “It is one of the most peaceful elections I have seen in my career”, quipped a co-operator.

At 2.30 pm, after the counting of votes were over, the RO came to the Auditorium to announce the results. He formally declared the name of winners from each constituency which included Sunil Kumar Singh, Bijendra Singh, Dr Chandra Pal Singh, Paresh Patel, Sudhakar Chowdhary, Bhanwar Singh Shekhawat, and R Rajendra. Chandra Pal was declared elected from two seats. 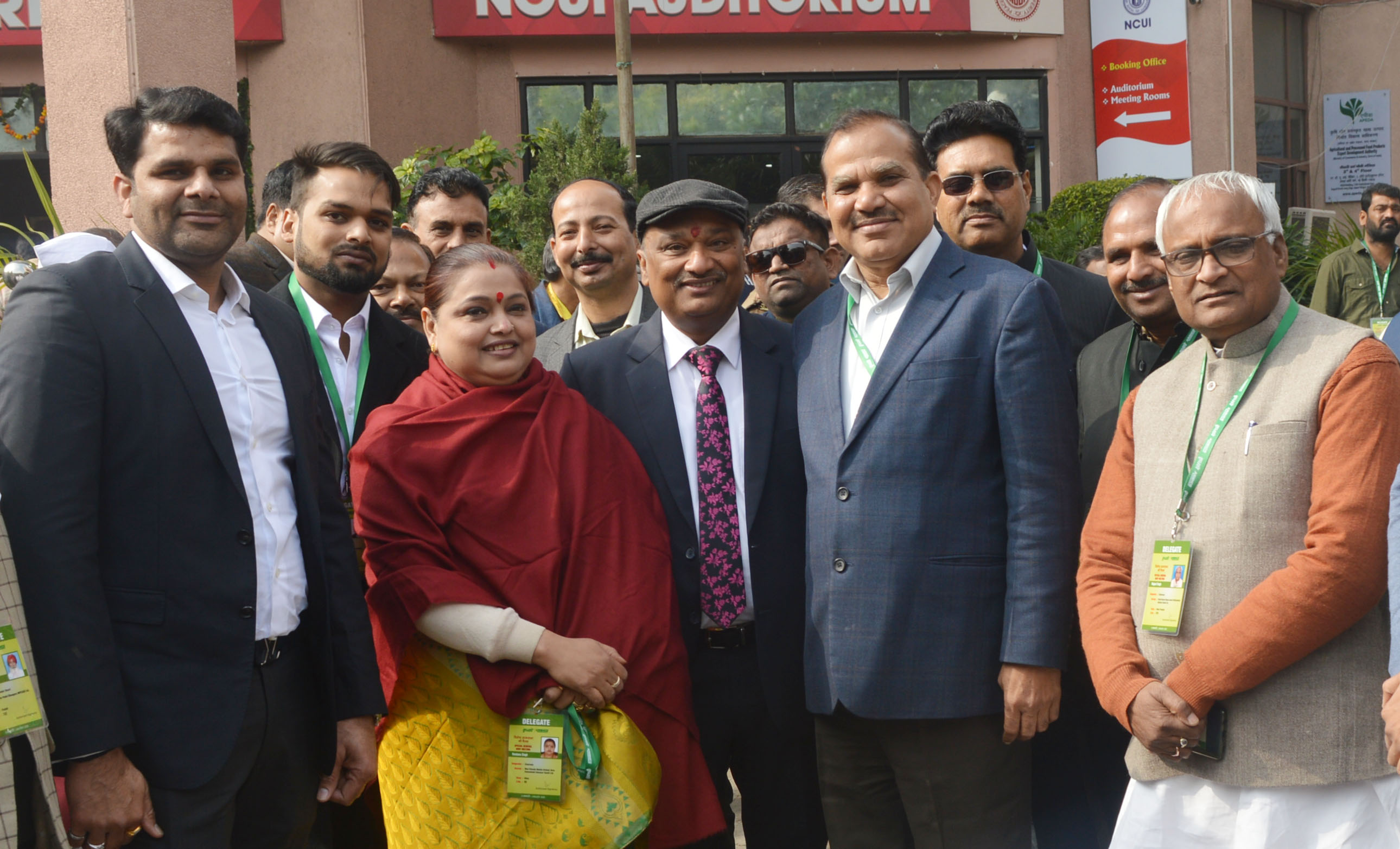 Coming to the Constituency number 4, the Returning Officer said out of 239 votes, 231 were cast. While Boda polled 88 votes, Maganbhai polled 136 votes.

Soon after the results the newly elected members along with the RO sat in the Conference Room to elect Chairman and his deputy. As there were just two nominations- from Chandra Pal and Sudhakar Chowdhary, the duo was declared elected unopposed.

A press release from Kribhco reads “61-year-old, Dr. Chandra Pal Singh is the son of a freedom fighter Late Sh.

Thakur Prasad Yadav. He came into limelight as a student leader in 1981, when he became President of Bundelkhand College, Jhansi. Subsequently, Dr. Singh emerged as a popular Kisan leader. In 1996 he was elected as MLA in the UP Assembly. In the 13th Lok Sabha election held in 2004, Dr. Singh was elected from Jhansi and became Member of Parliament. Dr. Singh is on the Board of several cooperative organizations of National and International levels. Dr. Singh is currently an MP of Rajya Sabha.”