Unprecedented line up of leaders to pay respects to Radadiya

by Ajay Jha
in IFFCO
1

Cutting across boundaries, co-operators of all hues assembled in large numbers at the NCUI Auditorium in Delhi on Tuesday to pay homage to IFCCO’s ex-Vice Chairman Vitthalbhai Radadiya.

The event was organised by IFFCO which was in the shape of a memorial ceremony for Vitthalbhai Radadiya, former MP from Gujarat and former Vice Chairman of IFFCO who left for heavenly abode on 29th July, 2019.

Cooperators who knew him and who had worked with him in furthering the cooperative movement spoke at length about his contributions to society in general and farmers in particular.

The entire board of IFFCO including its Chairman, B.S Nakai was present on the occasion to pay their homage to the distinguished cooperator. Those co-operators not connected directly to IFFCO were also present in large numbers including ICA A-P, Regional Director, Balu Aiyer, Bijender Singh, NCUI Chief Executive N Satyanarayan, among others.

Also present at the ceremony were the family members of Radaiya and farmers who had come from across the country.

Speaking on the occasion Union Minister Parshottam Rupala said that Radadiya was the first batch of leaders from Saurashtra who strengthened BJP in the area. He was a man who greatly prized the role of education in society opening schools and colleges especially emphasizing on girl-child education. Radadiya also helped set up guest houses in major centers of pilgrimage for the people.

Mansukh Mandaviya, Union Minister said that his door was always open for farmers and he would make all efforts to help them. “He would not hesitate in asking for donations from industrialists and they would readily oblige him as they knew Radadiya’s commitment for the cause”, Mandaviya recalled.

Dileep Sanghani disclosed that the concept of zero percent interest, later incorporated by many others and in KCC, was originally conceived by Radadiya and it was he who as Chairman of Rajkot DCCB introduced the scheme of 0% interest for loans to farmers.

IFFCO MD Dr U S Awasthi said that he knew Radadiya for two decades and he was an asset to IFFCO for his untiring efforts to improve the lot of farmers. Recounting many incidents from past Awasthi said when his name was proposed as the Vice-Chairman of IFFCO, the entire Board rose in his support.

B.S Nakai Chairman, IFFCO said, “Radadiya Ji was one of the most seasoned board members of IFFCO, he bought with him his rich experience in farmer welfare and cooperative development which helped IFFCO immensely, his presence will always be missed.”

NCUI President Chandra Pal Singh Yadav said I on behalf of the entire cooperative fraternity offer homage to the great cooperator. I also pray god to give strength to Jayesh-his son so that he can carry forward the rich legacy of his father.”

Earlier, when Vithal Radadiya’s son Jayesh was called by the anchor Tarun Bhargava to speak on the occasion, Jayesh was so overcome with emotions that he could not muster up the emotional strength to speak.

Apart from being the Vice Chairman of IFFCO, Radadiya was an eminent cooperator from Gujarat and was one of the most prominent politicians of the state. A former Member of Parliament from Porbandar in Gujarat, Sh. Radadiya held several important portfolios in the state of Gujarat during his political carrier that spanned over three decades. 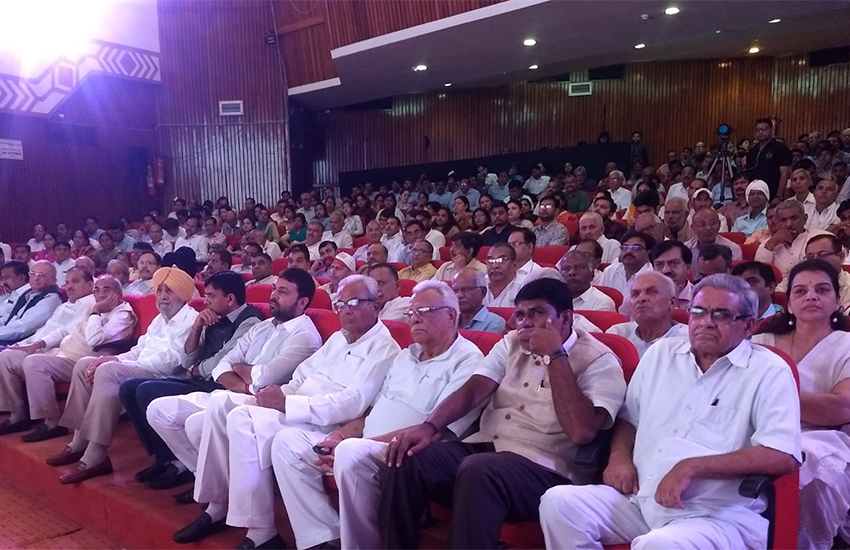