The poll pundits often say an election is an election and this was proved when one of the Directors of the IFFCO Board failed this time to get elected even as a delegate. Trimbakrao G. Sirsath, an outgoing director of IFFCO was defeated, according to a late news coming from IFFCO election office.

This means Sirsath who belongs to Maharashtra will not be able to contest the election, said one of the IFFCO officials hazarding a guess as to how many old faces may have to go. On condition of anonymity he said that the reorganization of constituencies and the entry of about 30 per cent new voters are two factors likely to swing the election results significantly. “A conservative estimate is that there would be at least five new faces this time”, he added.

The most intense fight is expected to take place in the constituency that encompasses three states where the cooperative movement is pretty strong. These are Maharashtra, Andhra Pradesh and Telengana. The existing director from Andhra Pradesh A. Praveen Reddy is likely to contest again but whether he would make it or not, nobody can say with certitude.

There is also Damocles’ sword hanging over those candidates whose states have seen the change of govt. Madhya Pradesh, Rajasthan and Chhattisgarh are three such states where Congress govt have come into being. There is a report that the outgoing IFFCO Director Ramakant Bhargava has got ticket from BJP to fight the Lok 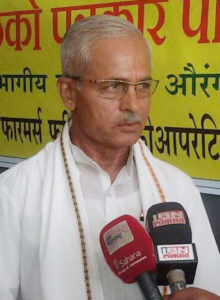 Sabha polls from Vidisha. “As to how far he would be interested in IFFCO elections is to be seen”, said an official.

From Uttar Pradesh Aditya Yadav is said to be safe as PCF has done good business with IFFCO. Also, he got re-elected by preponing PCF elections which was hailed as a masterstroke by observers. “But everyone is not going to be so lucky this time”, observers said.

For the first time in the history of IFFCO, one woman Director is also going to be elected. She would be voted by 46 new women RGB members who have been elected this time. Nobody knows till now who would finally emerge victorious.

Describing things still as iffy Tarun Bhargava, said “We would know about the contest only when the nomination begins from April 26”. Meanwhile, candidates from across the country are lining up to collect the voter list from the IFFCO headquarters. Indian Cooperative correspondent bumped into one such group which had come from Eta, Agra.

On their visit to the IFFCO headquarters in Delhi these hopefuls also try to meet IFFCO MD Dr U S Awasthi who has rather taken a strong line “there would be neither any nomination nor any co-option but only election”, as earlier indicated to Indian Cooperative.

Meanwhile, IFFCO has made the new ID card for the voters which will be distributed during election. It is reported to conduct the election with transparency, IFFCO will install 8 CCTVs cameras and LEDs will be displayed at the IFFCO headquarters in Saket.

The distribution of forms will begin from 26th April and close on 3rd May. The list of candidates who file their nomination papers would be made public on 5th May. The final list after scrutiny and withdrawal will be out on 9th May and the election of the Board of Directors would be held on 10th May 2019

The IFFCO board consists of 21 elected directors- 8 from Marketing Federation, 12 from other cooperative societies and one seat reserved for a woman candidate.

Shri R D Agrawal, Senior Advocate and former Judge has been overseeing the election process as the Returning officer. Shri Agrawal himself admitted and told Indian Cooperative that he is infamous for being a “no-nonsense man”. “Impartiality and transparency are the mantras around which this election is being conducted”, he added.