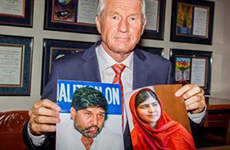 Dr Awasthi was greeted with the Nobel news soon after winding up his hectic schedule in Quebec City where he delivered lecture on the theme “feeding 9 billion” in a ICA gathering which saw participation  by eminent speakers including a Nobel prize winner.

At a time when India and Pakistan are going through tensions at the border, the South Asian neighbours on Friday shared a moment of honour and peaceful co-existence was emphasized once again ,though obliquely.

Kailash Satyarthi’s work made a difference to the lives of hundreds of thousands of children – and yet until he won the Nobel Peace Prize, on Friday, he was not a well-known figure outside of India.

The founder of Bachpan Bachao Andolan (BBA), a charity which has led the campaign against bonded and child labour in India and beyond, Mr Satyarthi, 60, has been dedicated to helping youngsters for almost 35 years.

Yousafzai is a schoolgirl and education campaigner who was shot in the head by a Taliban gunman in Pakistan two years ago. “Despite her youth, Malala Yousafzai has already fought for several years for the right of girls to education, and has shown by example that children and young people, too, can contribute to improving their own situations.

The prize, worth about USD 1.1 million, will be presented in Oslo on December 10, the anniversary of the death of Swedish industrialist Alfred Nobel, who founded the award in his 1895 will.

The winners were selected from a list of 278 nominees, including 47 organisations, the Nobel committee said.

Setting up co-op bank in Banglore