Sahakar Bharati organized a two-day Rashtriya Sangathan Samiti Meeting at Institute of Cooperative Management, Hyderabad, which was attended by its State Presidents, General Secretaries and others.

About 72 delegates from across the country were present in the meeting. One of the top Sahakar Bharati officials said delegates were drawn from across 25 states. “In fact, we had to restrict the number to 2-3 from each state so that actionable plan could be made in a relatively smaller group”, he added.

Soon after the meeting, talking to Indian Cooperative correspondent Sahakar Bharati National President Ramesh Vaidya said, “Every four months we organize a meeting of Sahakar Bharati leaders to deliberate on different issues related to the cooperative sector. The last meeting was held in Pune”, he informed.

This meeting, among other things, discussed the role of co-operatives in the rural development. “We enlisted the support and presence of NCDC Regional Director, Nabard DGM while NCCT Hyderabad was our co-organizer”, said Vaidya.

“Several experts having expertise in their respective fields enlightened the participants on various issues especially leadership development the main agenda of the meeting. Different sessions were held during the two-day meeting, he underlined. 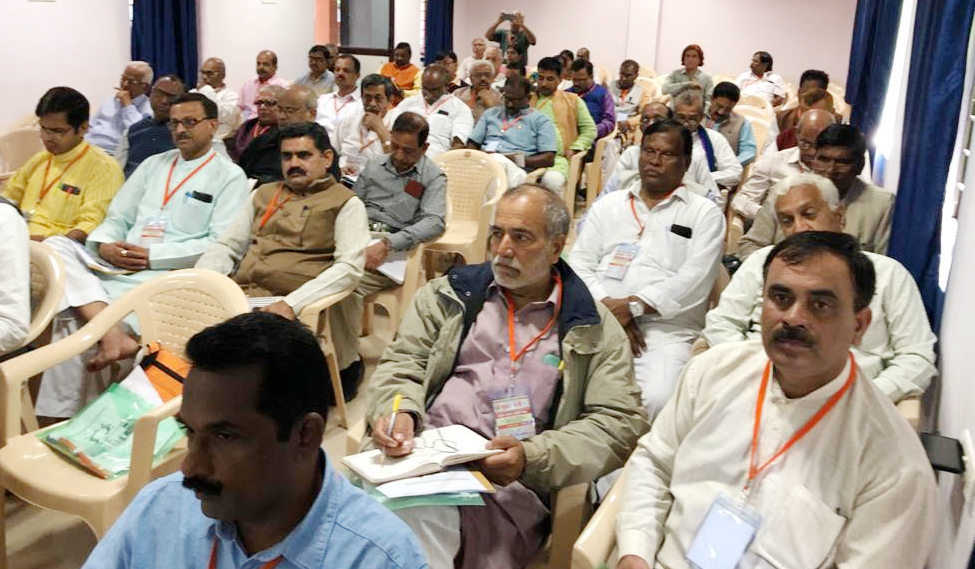 He further added that the meeting was fruitful and concluded with discussions on various topics on the agenda. Vaidya also reiterated Sahakar Bharti’s commitment to the cooperative movement and said it has made sincere efforts over the last year to address several problems confronting cooperatives in the country.

The two-day event brain-stormed various aspects of the co-op movement. Each day was filled with a series of sessions. We had four sessions in a single day, said Vaidya.

Adding to Vaidya’s words, Satish Marathe said the event was divided into two parts. One related to organizational matters and the second was briefing new karyakarta (workers who have joined recently) about the aims and objects of Sahakar Bharati.

Cutting across party lines we support the cooperative movement anywhere in the country; improving the image of it that took a beating in the wake of the PMC Bank Scam. This is high on our agenda, underlined Vaidya.

Established on 11 January, in 1978, the cooperative body completes 40 years of its existence today. Sahakar Bharati was established by Late Laxmanrao Inamdar in 1978 in Pune with an objective to enlighten the masses about the benefits of the cooperative movement. It has registered its presence in 400 districts so far and has an ambitious plan to reach out to every nook and corner of the country.