by Ajay Jha
in Featured, NCCF
22

More than 200 retired staff-members of apex consumer cooperative body NCCF are running from pillar to post to claim their pension which is due to them and on which even the Supreme Court holds a similar view.

In a detailed mail sent to Indian Cooperative these retired personnel have narrated their tale of woe detailing the step-motherly treatment being mated out to them by the current management. For their pensions to be made both respectable and regular, NCCF has to submit Form 3A to the Commissioner of EPFO. But NCCF is not doing so despite several reminders from the Commissioner office.

S N Singh, who retired as the Branch Manager of NCCF from Chandigarh said that while the Dispatch Register shows that a letter from the EPFO was received on 30.5.2018 , the MD denies receiving any letter. “The fact of the matter is that Anil Bahuguna who was the then MD marked the letter to Mr Lanka, Manager Administration who did not pay importance to the letter”, a pained Singh added.

“The Forms were submitted by almost all ex-employees to the NCCF sometime in January 2018. Thereafter, we have been pursuing the matter both by post and personal visits since that time with little result so far”, he underlined.

Earlier, the NCCF management maintained that action would be taken only if EPFO directs NCCF. The employees promptly took up the matter with the EPFO which issued instructions vide letter No 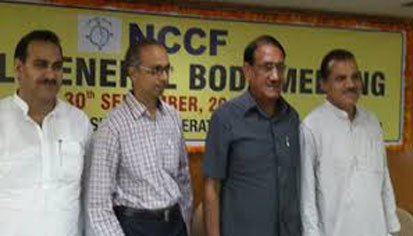 The retired employees have made a whatsapp group to achieve the goal of regularizing their pension and in group of 10-12 they keep pursuing the matter from the NCCF office to EPFO. NCCF have just to forward the Forms along with a certified copy of Form 3 A of each employee from 1995 onward till the year of retirement, they say. .

There was no financial involvement of NCCF but the EPFO would take further action only on receipt of the data from NCCF.

The recent meeting of these staff-members with Shaukat Ali, the current Managing Director NCCF has excited some hope in them. A sympathetic Ali, as claimed by Singh, is said to have expressed paucity of staff to complete the assignment of filling up 3A Form of employees. “Many of us are ready to work free of cost in case additional manpower is required for the work”, S N Singh added.

“Sir your portal is read by everyone in the cooperative circle; please help us by publishing our plight”, said Singh with a pain in his tone to this correspondent. “We have also met Chairman Vijender Singh at his home where he offered us milk and fruits and promised to look into the matter”, said Singh.

These retired staff-members are indeed an unlucky lot as their career faced a situation few could imagine. The then Administrator Manoj Parida raised their retirement age to 60 years from 58 in 2014 but the same was brought back to 58 years in 2016 after the elected Board came to power. These men numbering 200 were made to retire when they had hoped to continue in job for another couple of years. And now this pension woes!