Chairman and MD T Prasad Dora and B K Mishra respectively of FISHCOPFED the apex body of fisheries cooperatives recently met Union Agriculture Minister Radha Mohan Singh at his residence to find out when service charge will be released – a matter that has long been pending with the government.

Readers would recall that last year in the month of October Fishcopfed MD and Chairman had raised the issue of revival of service charges so as to implement the insurance scheme, the lack of which has badly been hitting the profit of the cooperative body.

The minister was supportive and made positive assurances and Secretary (ADH) and Joint Secretary also showed their keen interest in the development of fisheries cooperatives.

While talking to this correspondent on the phone, MD B K Mishra said “Minister assured us that the service charge will be released sooner than later and would look into the pending matter for an early re-dressal.

However, Mishra continues to be disappointed as he says six months have passed but no action has been taken so 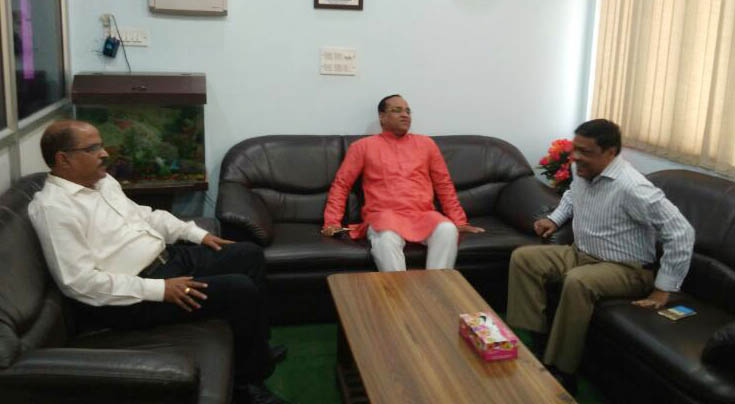 far. About 1.5 crore is pending before the government in the form of service charge which is affecting the balance-sheet of the beleaguered cooperative, he added.

Later, Kumar Sanjay Krishna, IAS, Additional Secretary and Financial Adviser, Ministry of Agriculture visited the Fishcopfed head office at Sarita Vihar. B.K.Mishra made a detailed presentation on the activities of the fishery cooperatives on the occasion and the officials from the ministry were impressed by the work done by the federation with limited funds, Mishra said.

Fishcoped has prepared the biggest database on fishermen’ co-op societies in the country and insured close to 46 lakh of fishermen in the last fiscal. The database may come in handy for the govt, said a source close to Fishcopfed.