Apex body is eager to diversify

Despite being unable to obtain service charges from the GOI, the apex body of fishery cooperatives -Fishcopfed has been able to recover its losses and earned a net profit of about Rs 50k in the 2018-19 FY. “The cooperative will begin paying dividends to its shareholders in a couple of years”, assured its Chairman speaking at the NCUI headquarters at the 41st AGM.

In the FY 2016-17 the cooperative had a total loss of about Rs 1.2 crore, said its Managing Director B.K.Mishra but we have covered a lot of ground, he said. In the first half of the day, Fishcopfed organized a high-voltage seminar and could succeed in getting assurance from the Union Minister Parshottam Rupala of the govt willingness to support Fishcopfed.

“The federation aiming at diversification has opened up 16 Aqua One Centres (AOCs) in the country. Last year fishcopfed took on lease a hatchery of 20 hectares from the Rajasthan government for seven to ten years with production commencing.

“Presently, we are doing the breeding of Indian Major Carps (IMC) and exotic carps successfully and the seed is being sold to local fish farmers”, Mishra underlined.

“But I am disappointed that despite our several meetings with former Union Agriculture Minister Radha Mohan Singh, the federation failed to get service charges of Rs 2 crore from the govt which has been pending for the last seven years”, Mishra said.

Speaking on the occasion of the 41st Annual General Meeting, Fishcopfed Chairman T. Prasad Rao Dora said, “We are planning to establish a GIFT tilapia hatchery in an area of about 2.5 ha with an installed capacity of 5 million fry per year.

“We expect to produce 1 million fry per month of the GIFT Tilapia at the farm from the year 2020-21.This will be 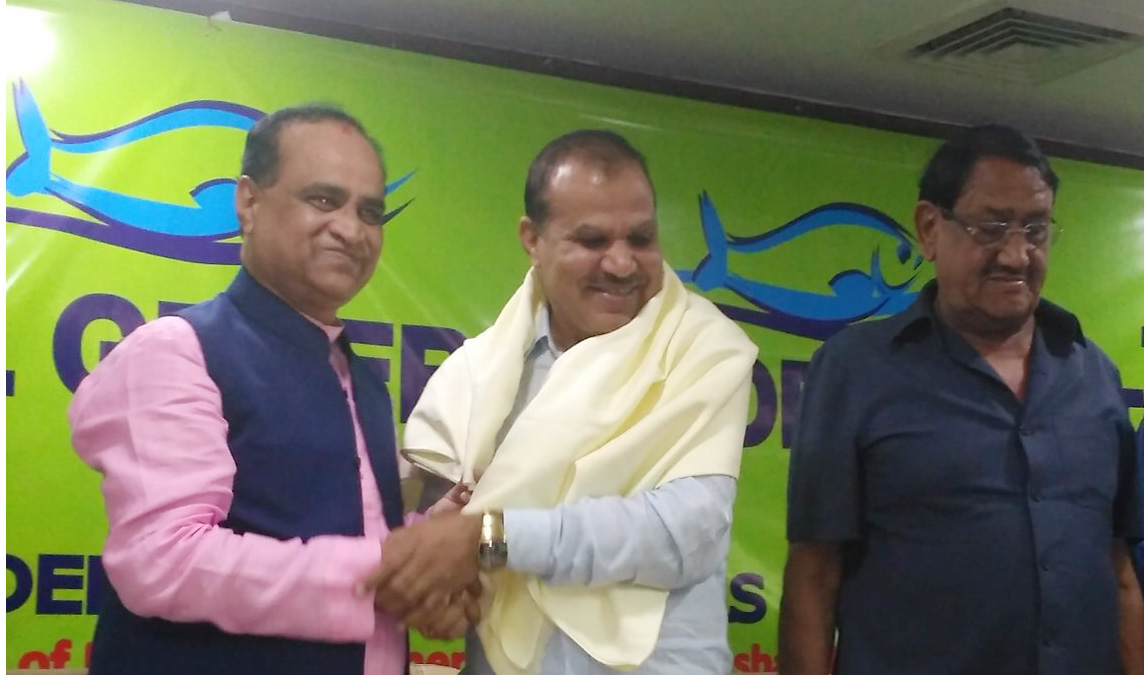 one of the best hatcheries in India”, Dora, a formidable co-operator form Odisha added.

“During the year 2018-19, 30,39,374 fishermen from 24 states and 5 Union Territories of the country have been provided insurance cover under a PMSBY policy through Oriental Insurance Company Ltd. FISHCOPFED is also planning some more insurance schemes like Hut and pond insurance for the welfare of fishers”, he said while addressing the gathering.

Dora further informed that, “In the current year, we have sent out a letter to the Ministry for releasing our pending service charges. I hope that action will be taken soon for the development of fisheries cooperatives and for sustainable growth of fishcopfed”.

Meanwhile, fishcopfed is also making efforts to open unit offices in states such as UP, MP and Manipur, so that fishermen can be better served.

“NCDC should revise the pattern of assistance favorably to fishery cooperatives. Fishery should be treated on par with Agriculture in all states and Union Territories.After the formation of the new Ministry of Fisheries, a separate budget could made for FISHCOPFED to strengthen the fishery cooperative movement of the country”, Dora underlined.

NCUI President Chandra Pal Singh Yadav, Vice-President Bijendra Singh, Fishcopfed Ex-Chairman Prakash Lonare and about 70 delegates from across the country participated in the AGM. Fishcopfed, Vice-President, Ramdas P.Sandhe proposed a vote of thanks.