The Delhi High Court has green-lighted the management elected in the recently held election of Delhi Nagarik Sahakari Bank to form the board. The court gave this verdict last week when the petitioners withdrew their writ.

It bears recall that the Delhi High Court had stayed the election result of Delhi Nagarik Sahakari Bank till 11th of January 2018. The court gave this stay verdict while considering petitions filed by the members against the irregularities committed in the election of the bank.

Soon after the judgment, the enthusiastic elected members of the board gathered in the bank headquarters in Karol Bagh and took the oath in front of delegates. The board members were profusely garlanded.

The election of DNSB was held on 3rd December 2017 in Delhi where about 4,500 voters cast their votes. The Chairman Candidate Dinesh Kumar received around 2500 votes while his rival Deepak Bansal got only 1500 votes. Atul Bhardwaj was elected as the Vice-Chairman of the bank.

Dinesh Kumar is the son of former Chairman Jai Bhagwan who was alleged to have indulged in irregularities causing the bank losses when he was the chairman of the bank during 2011-14. After several complaints were filed by members of the bank, Registrar of Cooperative Society had appointed Administrator to oversee the bank’s activities in 2014.

While talking to this correspondent Bank Chairman Dinesh Kumar said “Delhi High Court has given us relief and said the elected management can constitute the board. After the gap of three years the board has come to address the pending issues related to members”.

“As, we have just joined and it would be too early to comment on the current financial situation of the bank. We will give answer to every question in a couple of days. But the bank was in profit to the tune of Rs 1.5 crore in 2014 and we will strain every effort to bring the bank back on track”, Kumar said.

When asked about several delegates accusing your father the outgoing Chairman Jai Bhagwan of having indulged in irregularities, Kumar said “The allegations were baseless, derogatory and calumnious and were being leveled to tarnish the image of my father in the public”.

There were two panels comprising of 12 candidates who fought the election in which Dinesh Kumar’s Panel grabbed all the seats except for one candidate who lost the election.

DNSB was established in 1969 and is having a network of 14 branches. 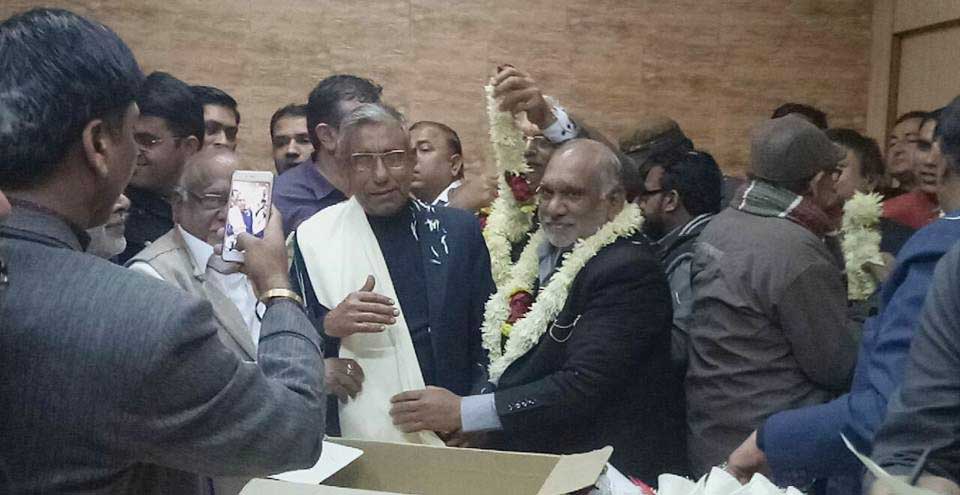