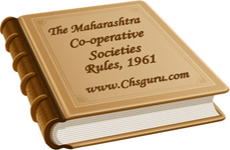 Cooperative societies including housing societies have to be encouraged by appropriate statutory provisions and procedural rules by every State and Union Territory to operate under democratic member control and with autonomy.

This is the latest constitutional direction laid down by Indian Parliament by inserting “Part IXB: The Cooperative Societies” in the Constitution of India vide the Constitution ( 97th Amendment ) Act 2011 made effective on 13 2 2012.

Members join the society voluntarily but separation may not be voluntary as the State laws cast certain duties on members to participate in the society affairs to certain minimum level and carelessness may costs him the membership resulting in involuntary separation. In a housing society a member joins housing society as that is the only option left to have a dwelling place. Whether he occupies the flat himself or sub-let or let it remain vacant he is liable to pay maintenance bills like other members.

If he does not attend at least one general body meeting of the Society held in consecutive ten years, despite being prompt in paying every maintenance bill before due date for ten years, the law says he must be expelled in-voluntarily. Read the latest Rule No 28 of the M.C.S. Rules 1961 as amended by the Maharashtra Co-operative Societies (1st Amendment) Rules, 2014.(30-08-2014) as quoted below:

QUOTE: “28. Expulsion of Members:- Any member who has been persistently defaulting payment of his dues or has been failing to comply with the provisions of the by-laws regarding sales of his produce through the society, or other matters in connection with his dealings with the society or who, in the opinion of the committee, has brought disrepute to the society or has done other acts detrimental to the interest or proper working of the society or for the reasons mentioned in section 26 of the Act,” in accordance with the provisions of sub-section (i) of Section 35, be expelled from the society. Expulsion from membership may involve forfeiture of shares held by the member. UNQUOTE

The language of the Rule indicates a MANDATE that a member MUST be expelled from the society ‘for the reasons mentioned in section 26 of the Act,” in accordance with the provisions of sub-section (i) of Section 35.

Section 26 of the M C S Act 1960 casts to following duties on a member of cooperative society, namely

(a) to attend at least one general body meeting within a consecutive period of five years :

(b) to utilise minimum level of services at least once in a period of five consecutive years as specified in the by-laws of the society:

Provided that, a member who does not attend at least one meeting of the general body as above and does not utilize minimum level of services at least once in a period of five consecutive years, as specified in the by-laws of such society shall be classified as non-active member

Provided also that, a non-active member who does not attend at least one meeting of the general body and does not utilize minimum level of services as specified in the by-laws, in next five years from the date of classification as a non-active member, shall be liable for expulsion under section 35 :

For expulsion of a member Section 35 of the M C S Act 1960 requires a resolution passed by a majority of not less than three-fourths of the members entitled to vote who are present at a general meeting held for the purpose expel a member.

DOES section 35 throws the matter of expulsion back to a democratic member control, not withstanding a direction under Rule 28 that a member be expelled from the society for the reasons mentioned in section 26 of the Act as quoted above.

If three fourth of the members present in a meeting called for that purpose do not pass an expulsion motion, what happens? Are the guilty of breach of the mandate under Rule 28?

For a change cooperator fraternity is invited to offer their views backed by logic.

NCHF: Sharma wins but not without tasting bitter pill

With grit you can take on mightiest

Co-op Bank: Can my mother get pension?