Tomar meets media on Dussehra Day to talk about IICTF

by Ajay Jha
in Featured, NCDC
0

Union Agriculture and Farmer Welfare Minister Narendra Singh Tomar is making an all-out effort to popularize and make the international co-operatives trade fair a success. Tomar organized a media interaction on Dussehra Day in Krishi Bhawan for the purpose.

The three-day event is going to be kicked off on 11th October, in Pragati Maidan in Delhi. The Minister informed that more than 150 co-operatives from 35 countries which include the US, Australia and Bangladesh, would participate in the fair.

The prime mover of the show- National Cooperative Development Corporation (NCDC) has roped in almost all big co-op brands including IFFCO, NCUI, NAFED and APEDA to make the show memorable.

The event would be the first of its kind in the sense that farmers and artisans of the country would be exposed to an international audience. One, they can show their worth and two, they can learn from the global exposure, said the Minister.

The IICTF, the acronyme used for the Co-op Fair, is basically aimed at realizing the vision of the Prime Minister of doubling farmers’ income, said Tomar. PTI quotes the Minister saying as 94 per cent of our farmers are members of at least one co-operative institution, the co-operative sector has a formidable role in increasing agriculture exports from the current USD 30 billion to USD 60 billion by 2022. 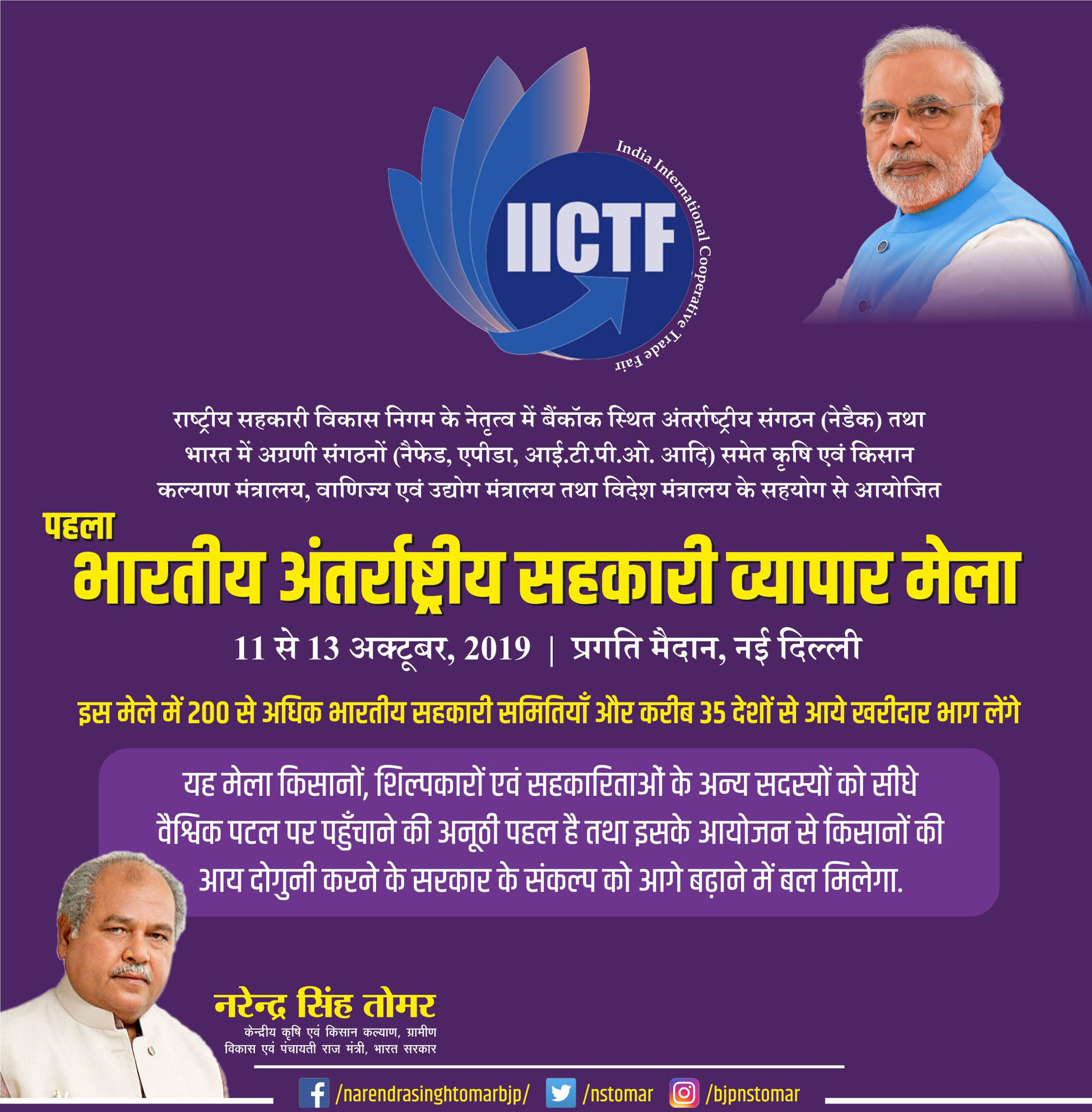 Taking cue from the Minister, NCDC’s Managing Director Sundeep Nayak who is said to have spent many sleepless nights overseeing the preparation for the fair, sent the detailed invitation of the Fair Wednesday morning.

The invitation reads IICTF would be kicked off at the Hall Number 7 of Pragati Maidan at 10.15 am on 11th October. While Union Agriculture and Farmer Welfare Minister Narendra Singh Tomar would be the Chief Guest, Giriraj Singh, Union Minister of Animal Husbandry, Fisheries and dairy would be the distinguished guest.

Other distinguished guests include Union State Ministers Parshottam Rupala and Kailash Chaudhary, Secretaries of both Agriculture and Commerce, among several top-notch co-operators from across the nation.

Six state governments and Union Territories as well as the country like Bangladesh are partners of IICTF. Earlier, Tomar had roped in Union Commerce Minister Piyush Goyal while launching the logo of IICTF. Several arms of

the govt including Commerce and External Affair Ministries are involved in the prestigious show.

In an interview given to Indian Cooperative earlier, Sundeep Nayak, MD of NCDC who is credited with conceiving the idea of IICTF had expressed his long-cherished dream of having a robust C2C business model on the lines of B2B.

NCUI: NCCE joins hands with NCHF for house for all