It can safely be called the top cooperative news of the year-the story of NAFED making a turnaround and earning a profit of Rs 280 crore after tax! It was like a rise of the phoenix from the ashes, cried co-operators one after another from the dais on the occasion of the 62nd AGM of Agri Co-operative, held on Friday at the NCUI Auditorium in Delhi.

It was after a gap of many years that Nafed announced a dividend for the shareholders. “The Board has decided to give 12 % dividend which is sure to increase in the coming years”, announced Nafed Chairman Bijender Singh amidst deafening clapping.

Welcoming the delegates Dr Bijender Singh also announced that TA/DAs have been doubled for the delegates. Known for mixing jocular utterances effortlessly in his speeches HE expressed his gratitude and thanked everyone in the Ministry from Narendra Singh Tomar to Parsottambhai Rupala to ministerial Babus but he reserved a special praise for the Prime Minister Narendra Modi.

I am a Congress man but I hail the Hon’ble Prime Minister for his kind intervention as a result of which NAFED could arrive at One Time Settlement with the banks, said Singh on the occasion. The Chairman also recalled the key role played by Late Arun Jaitley, then Finance Minister. 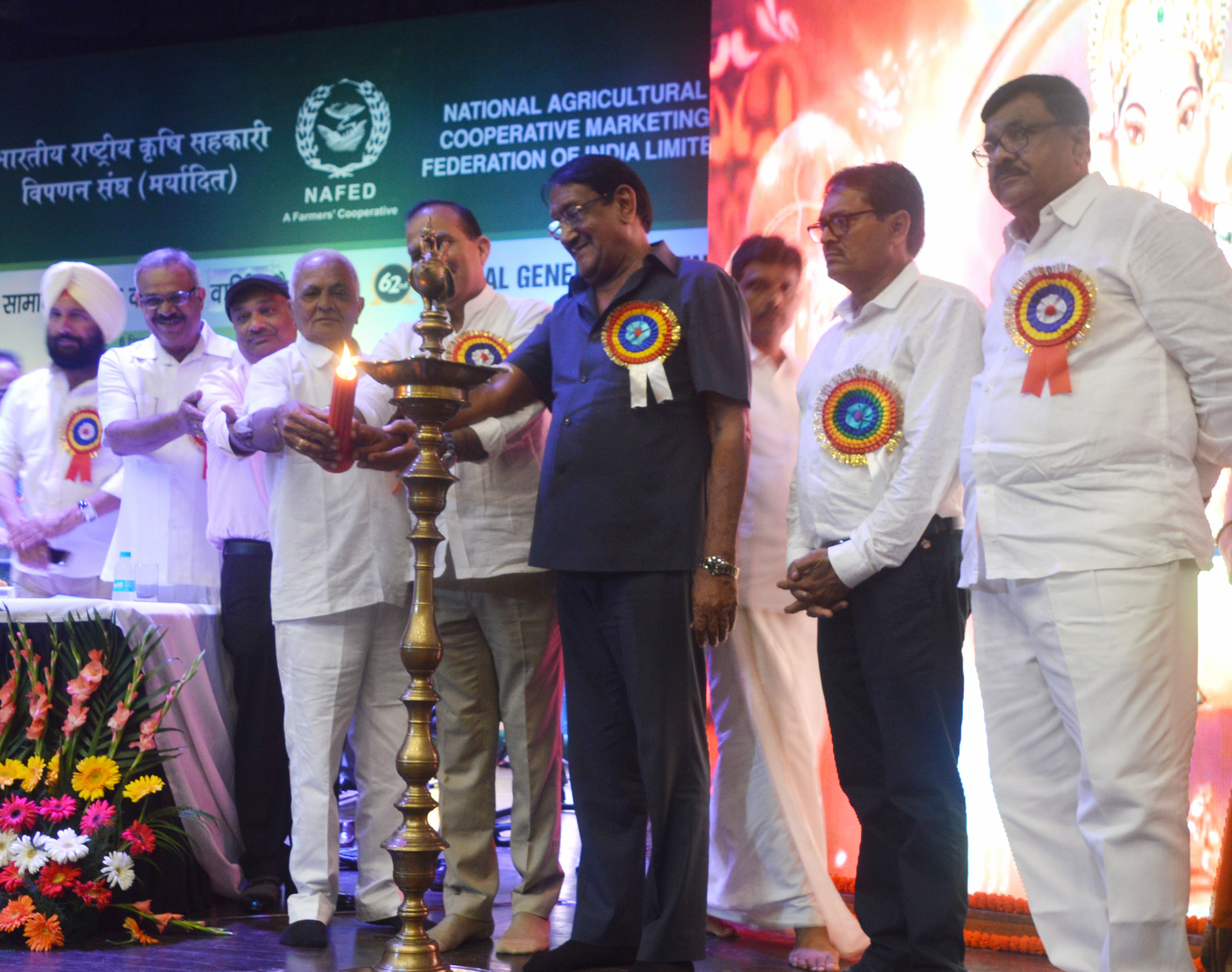 Bijender recounted the long tale of how Nafed which had hit rock bottom was revived. He also named Nafed Vice-Chairman Dileep Sanghani who was conspicuous by his absence, for his efforts. He also thanked Kundaria, the former MoS for his support.

“The debt of Rs 3000 was brought to Rs 600 and the prospects of selling all Nafed properties got revised to sale of just one on Lawrance Road; this was how govt of Modi helped us revive Nafed”, said Singh amidst applause.

Singh also appreciated the efforts of Member Federations/Societies, hard work put in by the Managing Director and his team of officers and staff of NAFED for the massive procurement undertaken by Nafed.

Managing Director Sanjeev Kumar Chadha, IFS tabled detailed account of business activities undertaken by Nafed during the year 2018-19 before the General Body. He also informed about the record procurement of oilseeds and pulses under the Price Support Scheme and also initiatives of Nafed in buffer stocking of pulses and 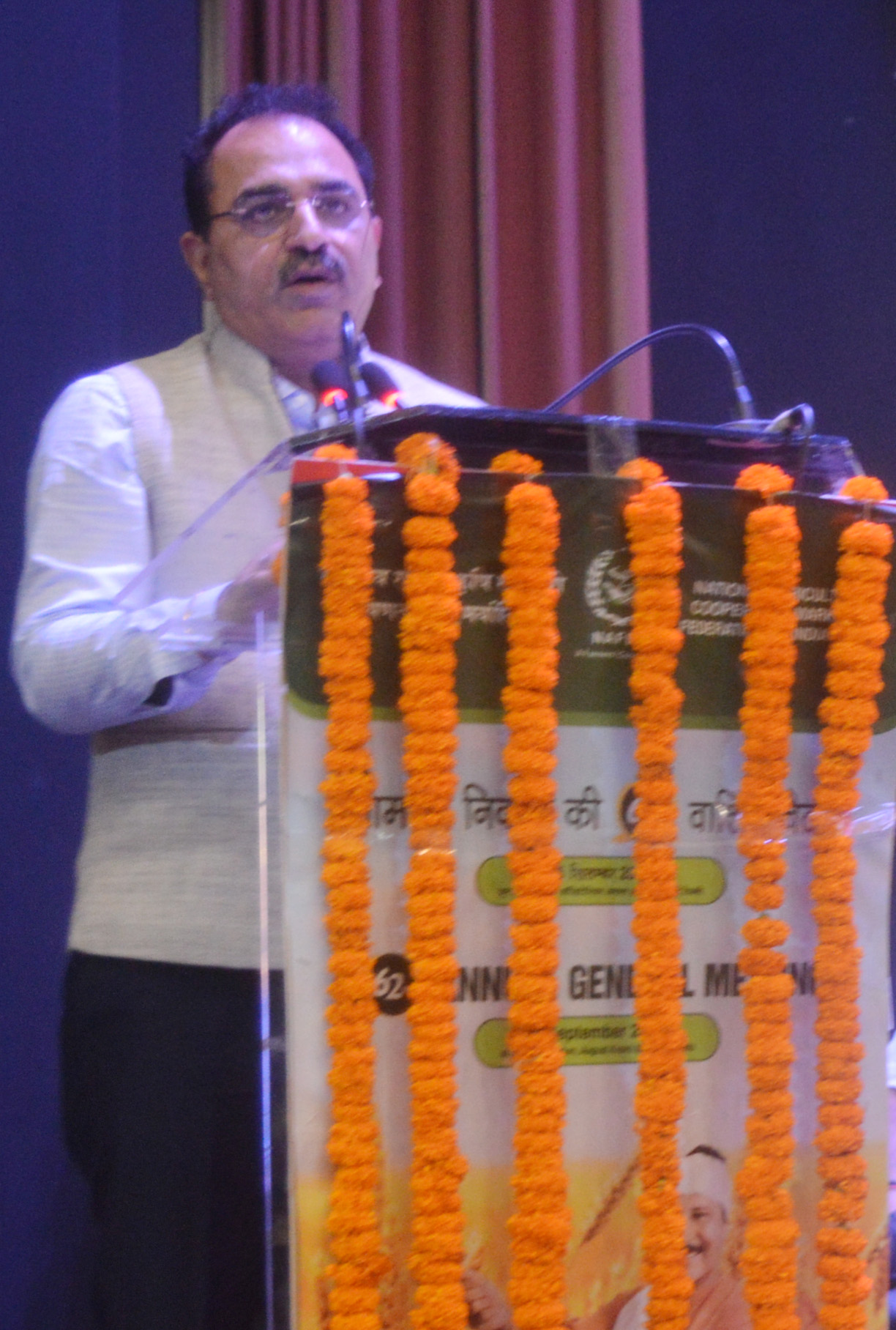 onion under the Price Stabilization Fund of the Government of India.

He also apprised of the purchase and opening of new NAFED office spaces in different states. MD Chadha also thanked Government of India for recognizing and selecting NAFED for procurement of apple crop from Kashmir after the abrogation of article 370 from the state of Jammu & Kashmir.

At the end, he appreciated the contribution of Government of India and its different Ministries in recognizing the efforts of NAFED and entrusting it with larger responsibilities. He also thanked all the Board Members, delegates, Officers and Staff for their sincere efforts and cooperation in achieving the present status of NAFED.

Sunil Singh, Nafed Vice-Chairman proposed a vote of thanks. He thanked all for supporting the rise of farmers from the ashes, as it were!