by Ajay Jha
in NAFCUB
0

NAFCUB- the apex body of urban cooperative banks and credit societies held its Annual General Meeting Sunday at the NCUI headquarters in Delhi. Among other things, setting up an Umbrella Organization (UO) for UCBs was a recurrent topic of discussion in the AGM.

Jyotindra Mehta the President of apex body was at his best in the meeting as he quoted everybody including Bill Gates to Uday Kotak to drive home the point” Adopt technology or perish”.

Quoting Bill Gates he said the present banks that we see today are dinosaurs of the future; there would be banking but there would not be any bank, Mehta said underlining the fact that more than 80% banking operations are done online with no need of a physical bank. 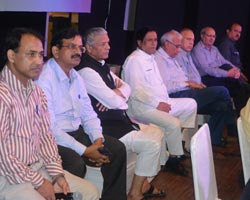 In his presidential note Mehta said “UCB is ready for a image makeover, we wish to be nimble footed, technology loaded, youth friendly local bank where you can be at ease doing your banking business.”

Lending his full support to the idea the Nafcub President has been organizing meetings with all the stakeholders in different parts of the country and seeking their support for the cause. 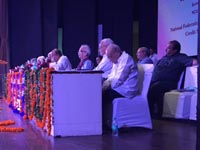 “Recently we met in Mumbai where all the big players including Saraswat Bank participated. All felt the need to have something like UO. It will change image of the sector from being fragmented individual entities most of which are small, to that of being a cohesive group with strong networking and bonding” Mehta said.

Mehta also emphasized on the youth participation and on the need to adopt the cutting edge technology. If he lauded the role being played by 80 Mahila banks, he also patted NAFCUB for organizing training programmes. He exhorted all to strengthen the Federation and emphasized inclusion of non-members into the fold.

Speaking on the occasion senior cooperator H K Patil lamented a raw deal being meted out to UCBs. You cannot even buy computer without regulator’s permission, forget about opening ATM or new branch, Patil said. Who lent to Mallaya or for that matter to Harshad Mehta?, he asked exposing the duplicity of RBI and PSU banks.

Patil demanded that Rs one lakh crore of UCB’s money locked in SLR and being used by govt must be freed. He also exposed the double standards of RBI in the matter of NPA between co-op banks and PSUs.

Mehta is sounding defensive; there is no need ; in fact we need to raise our voice and demand what is due to us, Patil was unsparing.

R B Shandilya, Vice President of NAFCUB read a resolution condemning the Inter-Ministerial Report on unregulated deposit Bill which was passed with a thumping majority.

Several of the delegates also spoke on the occasion detailing the experiences of their states. If Mohan Parasar of Rajasthan explained the draconian co-op amendment of Rajasthan, Advocate Jai Verma of Kerala exposed the CPM led govt for being discriminatory to DCCBs.

Other delegates who spoke included Sunil Gupta from Delhi, 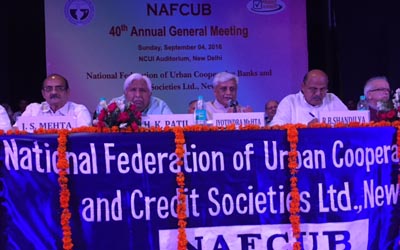 Shekhar Kiwe from Indore,Pramod Sahu from Odisha and Subhas Mohite from Pune. Many including Arti Bisaria supported the idea of UO for UCBs.

Mehta also announced NAFCU would organize a National Conference on 4 and 5 February 2017 which is likely to be inaugurated by PM Narendra Modi.

Several topnotch cooperators connected with the urban cooperative movement were present on the occasion. But there were no participation of biggies except Mukund Abhynakar , Group Chairman of Cosmos Bank. Neither the biggest UCB Saraswat Bank nor the third big SVC registered their presence. 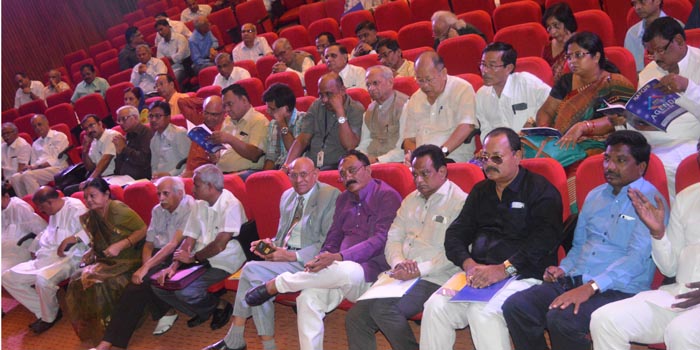