by Ajay Jha
in NACOF
0

Former NCCF Chairman Ram iqbal Singh who was denied a second chance in the 2005 NCCF election which veterans still remember as a classic case of cooperative back-stabbing had no such bad luck on Saturday when the newly elected Board of 11 directors elected him Chairman of the multi-state agri co-operative NACOF unanimously.

Harjeet Singh Grewal and Gurumukh Singh Hora were elected Vice-Chairmen. While Mr Grewal is Chairmen of Khadi and Village Industries in Punjab, Hora is an old hand who was on the board of IFFCO and NAFED in the past.

About 11 directors were elected –all unopposed , informed the returning officer Mr M L Talwar who retired as Chief 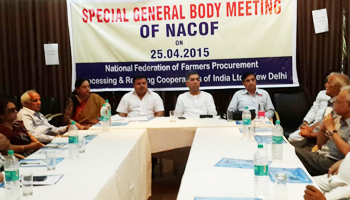 Director from the Ministry of Agriculture and Cooperation. Mrs Savitri Singh, a well known name associated with both NCUI and ICA, the new elected chairman informed has also been co-opted as Director to fulfill the requirement of the 97th CAA having women participation on the board.

The list of the elected board members is as follows

The Special General Body Meeting which took place on Saturday in the Shyama International Hotel in Delhi saw participation of delegates from various states. Speaking on the occasion Ram iqbal Singh said cooperatives have to overcome their habit of looking upto the government for support. There are opportunities galore and in the changed atmosphere we should draw more from each other than from the govt, he added.

Ranjit Singh who has played the host to the meetings of NACOF since the beginning said in the five years of time we have become a cooperative with a turn-over of Rs 250 crore. Starting from Rs 5 crore in 2009 this phenomenal achievement would not have been possible without the selflessness of the team. It is a matter of pride that when cooperatives are dying due to the greed of leaders, Nacof offers a refreshing experience and holds out hope for the future, Ranjit Singh also popularly known as Titu remarked.

Can a society levy cultural activities?