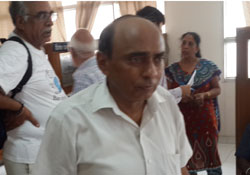 From withdrawing nomination to getting elected- that is Ashok Dabas. Dabas was unsure of his chance till the polling started but a conspiracy by Sanjiv Kushalkar’s “own men” forced Kushalkar to bank upon him.

As Dabas said to Indian Cooperative “jab bhagwan ho meharban to kya karega inshan”(When God is on your side who can harm you).

Most of delegates were from outside Delhi and Dabas stood no chance in the election. In fact, he wanted to opt out of the race to defend himself against the humiliation. But he himself did not know that accidental missing of deadline for withdrawing his nomination was God-ordained.

He stayed in the race and in the final calculation Kushalkar must have found him less “dangerous” compared to others. His name was included in the panel and rest is history.

Dabas entry is not a piece of good news for the Managing Director R M Pandey who is at a loss to figure out what went wrong where. Pandey was kept out of all poll strategies but still hoped that whatever be the situation, at least Dabas would never be able to romp home.

The two had history of acrimonious feud and the matter worsened enough in the past to go to the court. An energized Dabas may take on Pandey who is shattered in the wake of the results. Being MD he should not play politics but he seems to copy MDs of successful cooperatives who are good at the job; he is paying its price, said one of the Directors on condition of anonymity.

For Dabas, the re-election was crucial as it ensured not only his place in the apex cooperative organization NCUI but also a personal space for the office he runs from here. Besides, meeting cooperators from the whole of the country is possible only if you are on the NCUI Governing Council.

Closely associated with NCUI Dabas may pave way for Kushalkar’s entry into national cooperative scenario in true sense of the word as Pandey failed completely to do so for the Pune based Kushalkar in the past, said an insider.