Despite his tall claims, I will defeat him: Boda

In an exclusive interview given to Indian Cooperative, Maganlal Dhanjibhai Vadaviya explained why he decided to fight against the outgoing vice-chairman of Kribhco V R Patel, the voting for which is due tomorrow that is 9th January.

Admitting that he is an old disciple of Vaghajibhai Boda, Maganbhai complained that the Guru has gone back on his words. “In the last Kribhco elections he said this is going to be his last term but he did not stick to his words and again this time filed nominations for the election to Kribhco Board, which is nothing short of backstabbing”, complained Maganbhai.

“Last time I gave him space due to his age but he has since backtracked. I am ready to accept the challenge”, he added saying he knew Boda personally for the past twenty years.

Maganbhai’s bid to oust V R Patel has got many supporters from BJP, some of whom accompanied him to Delhi on the day of his filing nominations. Prominent among them are former Union Minister for State Mohanbhai Kundariya and Gujarat Cabinet Minister Jayesh Radadiya, among others.

The first-timer candidate Maganbhai claims he would win the election with huge margins and he quotes figures for the same. “I will receive 200 votes out of 239 votes. I will explain to you how I will get 200 votes”, he said confidently.

“Out of 78 delegates from Rajkot District Central Cooperative Bank 74 delegates are in my favour while 4 votes may go to Boda. Besides, there are 178 delegates who come from the Saurashtra region. Jamnagar DCCB, 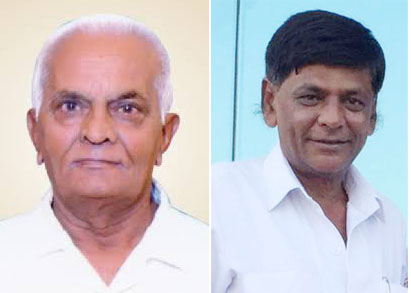 Junagadh DCCB and Bhavnagar DCCB’s associate member societies will caste vote in my favour”, he claimed quoting the support of the likes of Dileepbhai Sanghani and others.

Detailing his deep cooperative roots Maganbhai said he is Vice-Chairman of Rajkot DCCB, besides being on the Board of GUJCOMASOL. He is also Chairman of Morbi APMC. He has been associated with Kribhco for the past 30 years.

Rejecting Maganbhai’s tall claims Kribhco outgoing Vice-Chairman Vaghajibhai Boda said to Indian Cooperative “There is nothing new in his claim as anyone who fights the election claims to be the winner of the battle”.

“I am pretty sure voters will cast vote in my favour as they know what I have done for the cooperative sector in the state”, Boda said citing his contributions which included making several co-op societies members of Kribhco and constructing a large number of godowns.

“I have given 60 years of my life to the cooperative sector as a result of which delegates are with me and we will defeat Maganbhai in the election no matter whatever be his claim”, said Boda to this correspondent on the Phone.