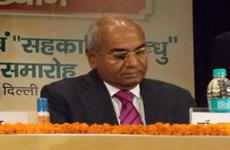 Reacting to the media report that urea policy is going to be reformed by the government soon, the largest farmers’ cooperative IFFCO has welcomed the move.

IFFCO Managing Director said that IFFCO is happy to learn about the positive move towards urea reforms and he repeated his demand for Direct Transfer of Subsidy.

Tweeting on the issue Dr. U S Awasthi said “ #IFFCO is happy to learn dt there seems to be a +ive move in #Urea  reforms. Also strongly advocating Direct Transfer of Subsidy since long.”

Stressing on the accompanying need of soil preservation Dr. U S Awasthi tweeted “#IFFCO had been advocating for reforms in #Urea to #SaveTheSoil from it’s Excessive use for #Sustainable #Agriculture.”

Readers would recall that there was media report in which it was said that the Modi govt is working on a three-year plan to deregulate urea fertiliser. The govt will simultaneously permit duty free imports without any canalisation or restrictions and credit the subsidy directly into the bank accounts of farmers, the report says.

India is on the cusp of a digital revolution that will cover land records, soil health cards, bank accounts under the Jan Dhan Yojna with Aadhaar numbers enabling the govt to transfer subsidy directly and remove all MRP and import restrictions, govt. officials are quoted as saying.

The proposed deregulation plan may be announced in the coming Union budget for 2015-16.