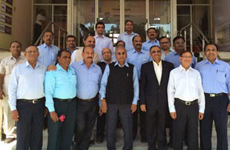 In order to give boost to make in India campaign IFFCO Managing director Dr U S Awasthi left for Gujarat on Monday to visit the cooperative major important unit IFFCO, Kandla. He tweeted “ Going to #IFFCO Kandla on 9Dec. It makes me immense happy with engineers, technicians, operators of unit. They are backbone of make in India.”

He interacted with the unit head and other staff and discussed various issues including energy schemes. A ebullient MD congratulated the team for their performances and tweeted soon after “ With#IFFCO Kandla top mgt incl@mrpatel1954 discussed details of energy schemes&major improvement great job being done “.

M R Patel who is heading the Kandla Unit and who is held as a competent professional was effusive by the MD’s words of encouragement. He assured the MD that the Kandla team is trying its best to improve performance in all areas under his able leadership.” We all assure you to achieve further”, he also tweeted to convey. 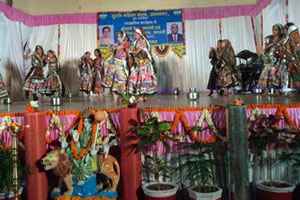 IFFCO Kandla is a basically a NPK/DAP Complex which was commissioned in 1975. In its short stay it has achieved many laurels not only in India but also in the world. During 2014-15, IFFCO Kandla unit has won  major awards such as  “Idea Champion award” at 15th National Summit of INSSAN, New Delhi, Dynamic CIO as one of the top 30 innovative heroes compendium IT Award, safety competition award by Gujarat Safety Council.

Recently IFFCO – Kandla won the Shram Ratna & Shram Veer award of the Gujarat Govt as reported in these columns.