IFFCO’s range of nano fertilizers launched last Sunday for field trials, are showing encouraging results from various parts of the country, says IFFCO Publicity Department. It bears recall that these products were simultaneously launched from 11 places from across the country.

A farmer from Kalapathar, Cuttack in Odisha, among others, has posted pictures of agricultural fields before and after the application of the nano fertilizers which included Nano Nitrogen, Nano Zinc and Nano Copper.

It bears recall that IFFCO launched field trial of its Nano range of fertilizers last Sunday at its mother plant Kalol. Several central govt ministers including Union Fertilizer Minister Sadanand Gowda, his junior Mansukh Mandaviya and Union State Minister, Parshottam Rupala were present on the occasion. Gujarat was represented by its Deputy Chief Minister Nitin Patel and Jayesh Radadiya, among others.

It was here at Kalol that Dr Ramesh Raliya- the scientist who helped develop the entire Nano products, narrated how he came to be associated with IFFCO.

“When I announced from USA about me developing Nano products to my parents, they just asked one thing-will it help Indian farmers? I was stunned as well as confused. My mind began to wonder how to make Indian farmers the beneficiaries of my research”, Ramesh Raliya narrated the captivating story to the audience in Kalol on the occasion of the historic launch of Nano products. 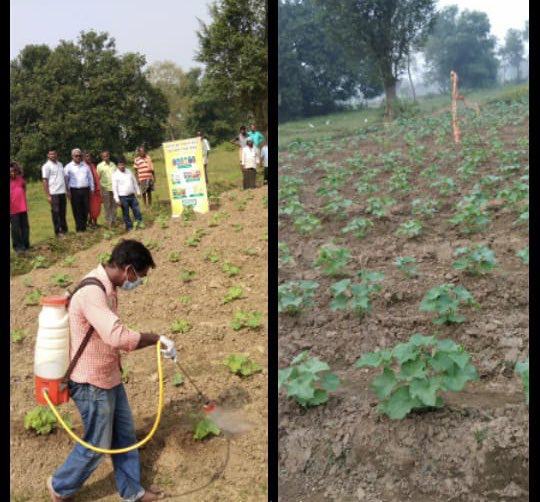 “I wrote a letter to Prime Minister Modi, whose Ministers got in touch with me soon after and explored the possibilities of having Nano fertilizers in the country”, Ramesh said.

“Later IFFCO’s joint MD and Marketing Director met me in America and expressed the desire of their MD Dr U S Awasthi that I should develop Nano Products for IFFCO. I met Awasthi and the rest is history”, the scientist narrated the tale as if he were discussing some fictional story unlikely in real life.

Later after the event, IFFCO Chairman and MD made it a point to meet the parents of the scientist. Awasthi also posted a photograph of the same and wrote “Today, I met the respected parents of our young & dynamic Nanotechnology scientist Ramesh Raliya who developed the new Nano products Nano Nitrogen, Nano Cooper & Nano Zinc. I conveyed my best wishes to them for their son’s achievement.”

From Awasthi to Sadanand Gowda to Rupala, all the speakers lauded Ramesh for his love for mother India. Humbled by the adulation, Ramesh Raliya said ”The credit for what I have accomplished goes to my parents who are farmers living in the Indian countryside like millions of People.”