With an objective to increase the business of PACCS in the state, Uttar Pradesh State Cooperative Bank plans to deploy Business Correspondents. This was revealed during its 59th AGM which attended by both Union and state co-operative ministers Narendra Singh Tomar and Mukut Bihari Verma respectively, among others.

These Business Correspondents will go directly to the farmers for doing business for cooperatives and will be employed on a regular salary. In the first phase, it will be started in six districts of the state.

Speaking on the occasion, Union Agriculture Minister Narendra Singh Tomar said, there is a need to connect farmers with technology to deal with the challenges of climate change. Held last week at Indira Gandhi Pratishthan, Lucknow, the event saw huge participation of farmers. Bank’s Chairman Tejveer Singh and MD Bhupendra Kumar Vishnoi held the fort during the AGM.

“There has never been a time in our history when cooperation has not strengthened our culture, education, trade and economy. It is primarily our cooperative way of thinking that laid the foundation for our strong society”, Tomar said on the occasion.

He further added that, “The development of poor people, farmers, youth living in villages is dependent on 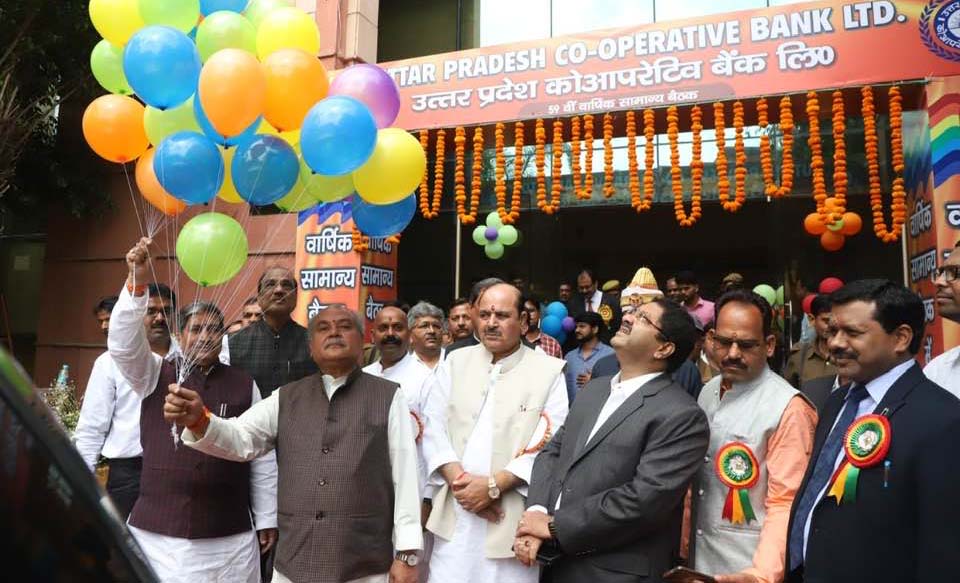 “Prime Minister Shri Narendra Modiji is focusing on strengthening agriculture and rural economy and has allocated Rs 3 lakh crore for the development of agriculture and the countryside in the budget”, he said.

On this occasion, Uttar Pradesh Cooperative Minister Mukut Bihari Verma said more budgetary support is needed for the construction of godowns of the PACCs societies. Verma called upon PACS to spearhead the co-op movement in the countryside.

Talking to Indian Cooperative, UP State Cooperative Bank Chairman Tejveer Singh said, “We are performing well in meeting the expectations of farmers and in the last fiscal the bank earned a net profit of Rs 42 crore.

“The bank has a business mix of Rs 12,000 crore and disbursed crop loans of Rs 3820 crore. We are having ambitious plans to take the bank to newer heights and our bank is equipped with the latest technology. There are over 50 DCCBs in UP which are having 1200 branches across the state, Singh added.

The bank’s MD Bhupendra Kumar presented the annual report which was passed unanimously.

The bank’s Vice President Jitendra Bahadur, Nabard GM Sunil Kumar and others were present on the occasion.