There are few occasions in the history of a cooperative when it catches peoples’ attention the way Biscomaun has done in Bihar through the sale of onion. Through its many counters and mobile vans the much-talked about cooperative is selling onion at the rate of Rs 35 a kg while the same is sold in the open market double the rate at Rs 70 a kg.

Naturally, it has led to riots at many places. Police force in general and sometimes the SPs and DMs of respective areas oversee the sale of onion which is given following a quota of two kg per head.

“While the state co-op minister Rana Randhir Singh inaugurated the grand sale of Biscomaun onion in Sonpur fair, we dispatched a mobile van to the village Kalyan Bigha of the Chief Minister Nitish Kumar. I have concrete knowledge the CM’s family members have bought onion from our van”, said an upbeat Chairman of Biscomaun Sunil Singh, who has become a celebrity overnight and is being hunted by TV crews all over the place.

While in the CM’s village the District Magistrate oversaw the sale, in Jharkhand the sale of onion is not possible without police force, said Sunil detailing that huge hoarding about the onion sale is dotting the skyline of Jharkhand.

“In Ranchi we have sold about 300 tonnes so far which means 2kg each to about 1.5 lac people and the same is true of Patna. It is not a small figure”, added the Chairman. Sales are all computerized with the details of buyers including their names and mobile numbers.

“We are guarding against any mischief and in fact have announced a cash prize of Rs 5000 to anyone who buys the onion at a rate higher than Rs 35 from a Biscomaun sale counter, just as we did in the case of urea”, said Sunil. I am yet to receive any complaint, he added.

Striving to live up to the people’s expectations, Biscomaun is working in top gear with more that 100 daily wagers packing the onions throughout the night in a packet of 2kg. Come morning and the vans are out selling onions. 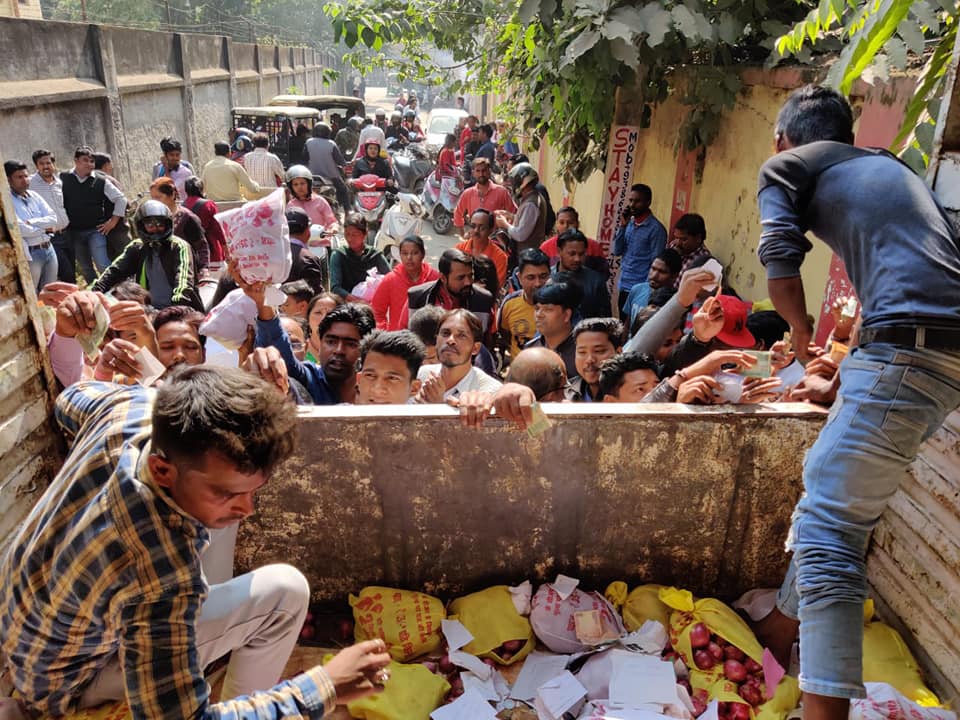 The mobile vans could be spotted early morning at all the major parks of Patna for the benefit of morning-walkers.

Similarly, at Patna Secretariat we station mobile vans at 4 pm so that when the babus come out of office they are able to buy onions at cheaper rates, said Sunil. Those not lucky enough to spot a van, can visit Biscomaun head office where 50 counters have been opened, he added.

Sunil Singh who is also on the Board of Nafed which supplies onion to Biscomaun, earlier tried the idea of a fixed price for apple which was a huge success across Bihar.

Informed source says that Nafed sends its stuff– be it apple or onion to its member-cooperative federations in all states but usually the middle man eats up the stock pocketing the profit.

“It goes to the credit of Biscomaun in general and Sunil Singh in particular that the Nafed stuff reaches straight to consumers; that way he is doing a great service to the idea of cooperative”, said his associates.

Sunil, on his part says that trust comes to a brand only after genuine sacrifice. Explaining it further he says Biscomaun sells IFFCO’s DAP at Rs 1200 per bag which is being sold in open market at Rs 1100 per bag only. Still people buy our DAP paying higher rates. It is the brand value of IFFCO from which Biscomaun had benefitted a lot, he said thanking its MD Dr U S Awasthi in the process.