by Staff Reporter
in Featured, From States
0

Ace co-operator of Gujarat Dileepbhai Sanghani has been re-elected Chairman of the Gujarat Cooperative Marketing Federation (GUJCOMASOL) unopposed, in an election held on Thursday at its headquarters in Ahmedabad.

Govindbhai Parmar have been re-elected Vice-Chairman unopposed. Since there were no other nominations, the two romped home without hassle.

Being an important co-op body active in procurement and distribution of agri products, on the lines of markfeds active in different states, GUJCOMASOL is a hot co-operative seat where both Congress and BJP try to control levers of power. It was after great effort that a couple of years ago BJP could get a handle on the situation and unseat Congress.

Even this time, the choice of Chairman and Vice-Chairman has been decided by none other than the country’s Home Minister Amit Shah, say informed sources. It is being said that Sanghani’s name was cleared in a meeting between state BJP President Jitubhai Vaghani and Amit Shah when the latter visited the town on the occasion of Makar Sankranti.

Announcing the results Ahmadabad city deputy collector, who has been appointed as the returning officer to oversee the election process said, Dileepbhai Sanghani and Govindbhai Parmar have been re-elected unopposed as the Chairman and Vice-Chairman of Gujcomasol.

A humbled Sanghani thanked the party and the cadre for reposing faith in him. He vowed to take the already profit-making co-op body to still greater heights. Besides doing regular activities, Gujcomasol also adds value to things catering to the needs of the farmers of Gujarat, Sanghani claimed.

The election for Gujcomasol was held in 2017 for five years but according to bye-laws of the apex marketing federation the Chairman and Vice-Chairman have to get elected midway–that is after every 2 and a half years. Sanghani made it to the top post once again along with his deputy.

Readers would recall that soon after taking over as the Chairman in 2017, Sanghani launched a much sought-after market product – Peanut Oil in Amreli.

The Gujcomasol board comprises of 34 members and it is learnt that only four leaders are from congress party but the remaining 30 are from BJP. Several outgoing directors who were earlier with congress but later joined BJP are also on the board.

In a telephonic communication with Indian Cooperative correspondent, Sanghani said “I will work for the benefit of farmers and put in my efforts to get them the best price for their products”.

Besides being the Chairman of NAFSCOB, Sanghani is also the Vice-Chairman of the largest fertilizer cooperative of India-IFFCO. 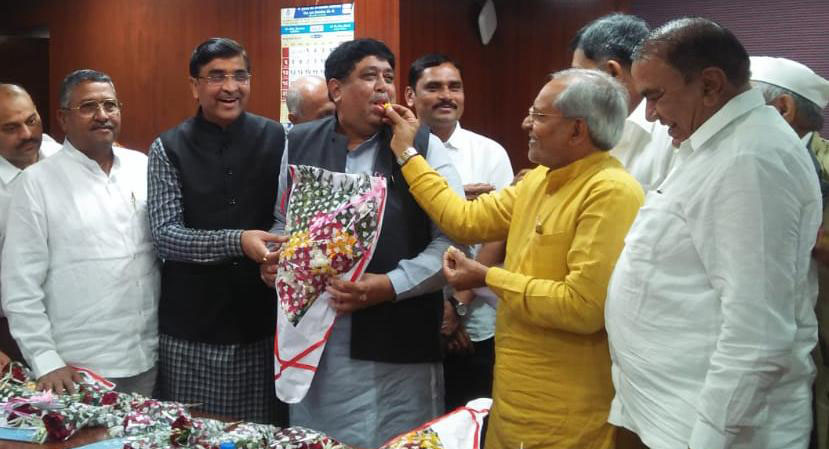