Nafed Vice President Dileep Sanghani met Prime Minister Narendra Modi on Wednesday in Delhi and among a host of issues, Nafed bail-out package cropped up. Sanghani returned satisfied after Modi promised him to continue with initiatives begun by former minister Mohanbhai Kundariya on the issue.

Kundariya a great champion of Nafed’s continuity for the benefits of millions of farmers in the county had left the matter at the stage of the preparation of the Cabinet note. Just before his removal, a fortnight ago senior cooperators including Sanghani and Bijender Singh had called on Kundariya.

“Prime Minister lent a very patient ear to the issue and promised me that whatever Kundariya has done would be fast-tracked. Please send my office all the details” Sanghani quoted Prime Minister as saying while talking to Indian Cooperative.

Meanwhile, Indian Cooperative has gathered that the Cabinet note on the bailout package has landed on the desk of the Union Agriculture Minister Radha Mohan Singh. “Cabinet Note is ready and is likely to be presented in the meeting sooner than later” a source informed Indian Cooperative. Some queries raised by the legal department had delayed the matter, the source claimed.

Earlier, the govt had decided to give an annual grant of Rs 30 crore for a period of 5 years to the Nafed to meet its 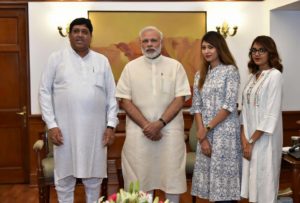 financial obligations including salaries of employees and administrative expenses.

At the time of elections of Vice-President in Nafed, leaders such as Bijender Singh and Chandra Pal were eager to get Sanghani elected as they felt that his proximity to the BJP top brass would prove handy for the future of Nafed. Sanghani has precisely fulfilled their expectations.

Besides, Sanghani is not only proving useful for the Nafed but for the entire cooperative fraternity as in his meeting with Prime Minister he raised many other issues concerning the cooperative sector.

“It was an informal meeting as in the past I was one of the ministers in his Cabinet. My two daughters had also accompanied me just to say hello to badebhai Narendra Modi”, said Sanghani.