Nair and others complained of bogus affidavits by candidates

The Central Registrar has appointed Deepa Sharma, an advocate as Arbitrator in matter of complaints against the recently concluded election of National Labour Cooperative Federation of India (NLCF).

Euphoric about the development VPP Nair, the man who consistently raised the issue in all possible fora said the arbitration will have to be decided within the next three months. The elected Board has not been suspended and would continue till then, he added.

It bears recall that the NLCF ex-directors including Nair who lost the election knocked at the door of Central Registrar citing cases of ineligibilities of several elected candidates. We had raised the matter to Returning Officer also but he paid no heed to our complaints, said Nair.

It bears recall that the defeated directors-VPP Nair and his supporters had argued that the newly elected Chairperson Avili Mighito Awomi was not eligible to contest the election and she had submitted bogus affidavits. Nair also accused other board members of violating norms and bye-laws of NLCF by contesting the election without eligibility.

Levelling charges against Kushalkar’s style of functioning his detractors complained that -Indian Labour Cooperative Society had not gone through the audit since four years during his tenure.

Chairperson Avili Mighito Awomi representing Aye Multipurpose Cooperative Society, Nagaland and Director Lolia Susan representing Zachamo Multipurpose Cooperative Society have been the butts of accusation for submitting bogus affidavits for contesting the election. As these societies are involved in agriculture business, they do not meet the criteria for eligibility for the election as per the bye-laws of NLCF”, Nair asserted.

Readers would recall that Avili Mighito Awomi, believed to be the second wife of the outgoing Chairman Sanjeev Kushalkar was elected as the Chairperson and Narendra Singh Rana and Amit Bajaj as the Vice-Presidents in the recent election of NLCF.

Awomi, representing Forest Labour Constituency hails from Nagaland. Some Kushalkar detractors earlier described it as “Kushalkar doing a Lalu in labour cooperative politics”. They recalled how Lalu Yadav made Rabri Devi the Chief Minister of Bihar when he himself was barred by the provisions of law. 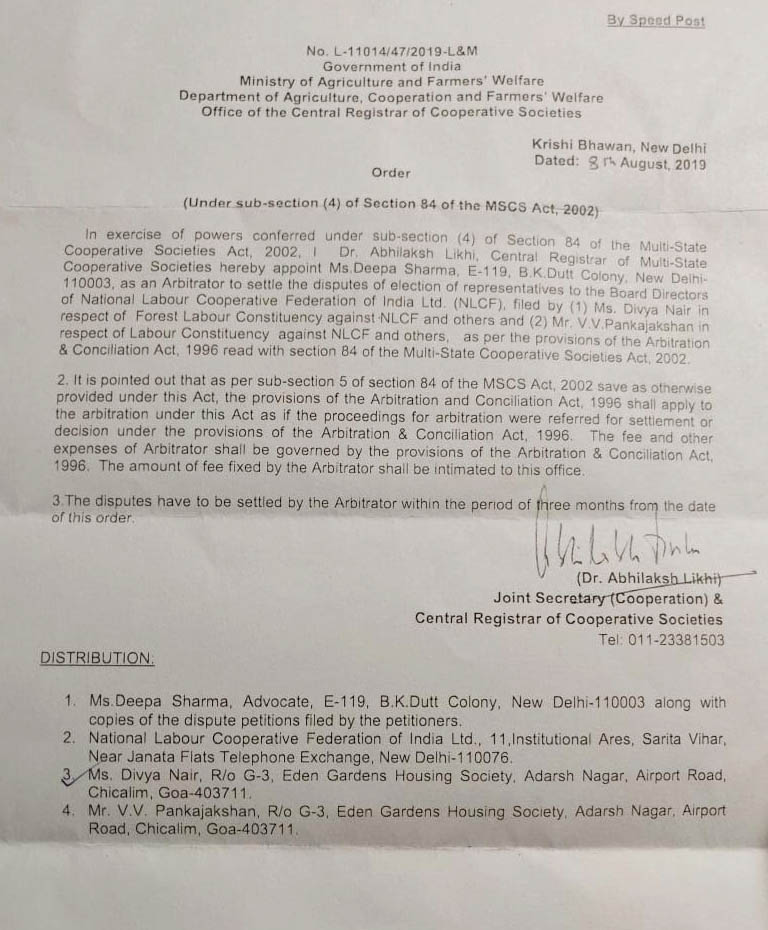