Inaugurating a new building of chocolate cooperative CAMPCO in Puttur in Karnataka, Union Commerce Minister Suresh Prabhu talked about agricultural export policy likely to be implemented soon to help double the income of farmers on Sunday.

What the Agricultural Ministry has failed to do is now being taken up by the Commerce ministry. Prabhu who himself is a committed cooperator appreciated the role being played by Campco in farmers’ life and said cooperatives are best suited to adopt the best practices being in use in the world and bring them on the doorstep of its members who could benefit from them.

Prabhu also felt that more cooperatives are needed in the agro-processing sector. Co-ops are best suited to help the 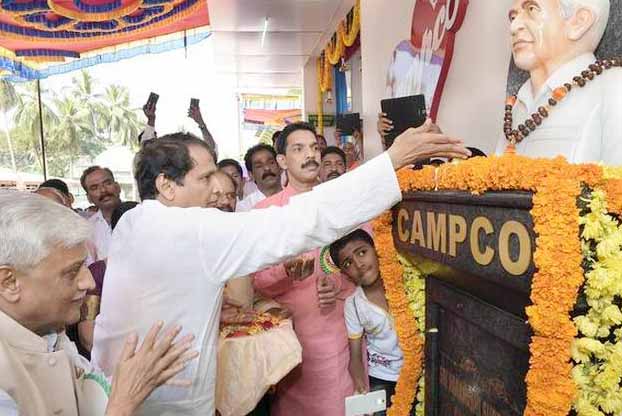 farmers in many ways than we can imagine, he underlined.

The Minister also touched upon the issues being faced by rubber growers and spice-producers and promised to come up with solutions for them sooner than later.

Speaking on the occasion Jyotindra Bhai Mehta talked of a chamber of commerce for agriculture in the country on the lines of industries to help achieve the issue of price stability for agri produce. Mehta had earlier inaugurated the Rajkot office of CAMPCO which aims to expand its footprint area in Gujarat through this office. Mehta had called upon all to lend support to Campco in the state of Gujarat.

Campco is credited with bringing in prosperity into the lives of lakhs of growers of Arecanut and Cocoa and has won numerous awards for its sterling performances. Campco’s new building will be built at a cost of Rs 19 crore, the godown will cover 1 lakh sq ft and it will be completed in two years. A bust of the late Varanashi Subraya Bhat, founder-president of Campco would also be unveiled on the occasion by Sahakar Bharati Chief Jyotindra Mehta.