It was a big day for cooperators as was evident by the presence of an unprecedented crowd at Bapu Sabhagar in Patna on Sunday in the Bihar Co-op Conference. Cooperators from across the country had assembled in Patna and they were amused to find their photographs beckoning from every corner of the town. Patna was plastered with co-op icons, even as co-op pride reached its peak.

Bihar Cooperative Conference was also remarkable due to the fact that the Chief Minster delayed his other engagements to be part of the show, boosting the morale of cooperators who are rather not given enough attention by the political class.

Remembering his cooperative connection when he was instrumental in formulating the MSCS Act 2002 as the Union Agriculture Minister in the Atal Bihari Bajpai govt, Bihar Chief Minister Nitish Kumar welcomed cooperators coming from across the nation and exhorted them to lend a helping hand in his pet project Jal-Jeevan-Haryali.

Nitish was speaking at Bapur Sabhagar where more than 6000 PACS members (3400 of them are newly elected) rubbed shoulders with the upper crust of the co-operative sector that included Dr Chandra Pal Singh, Dr U S Awasthi, Jyotindra Mehta, Dileep Sanghani, Bijender Singh, among others. 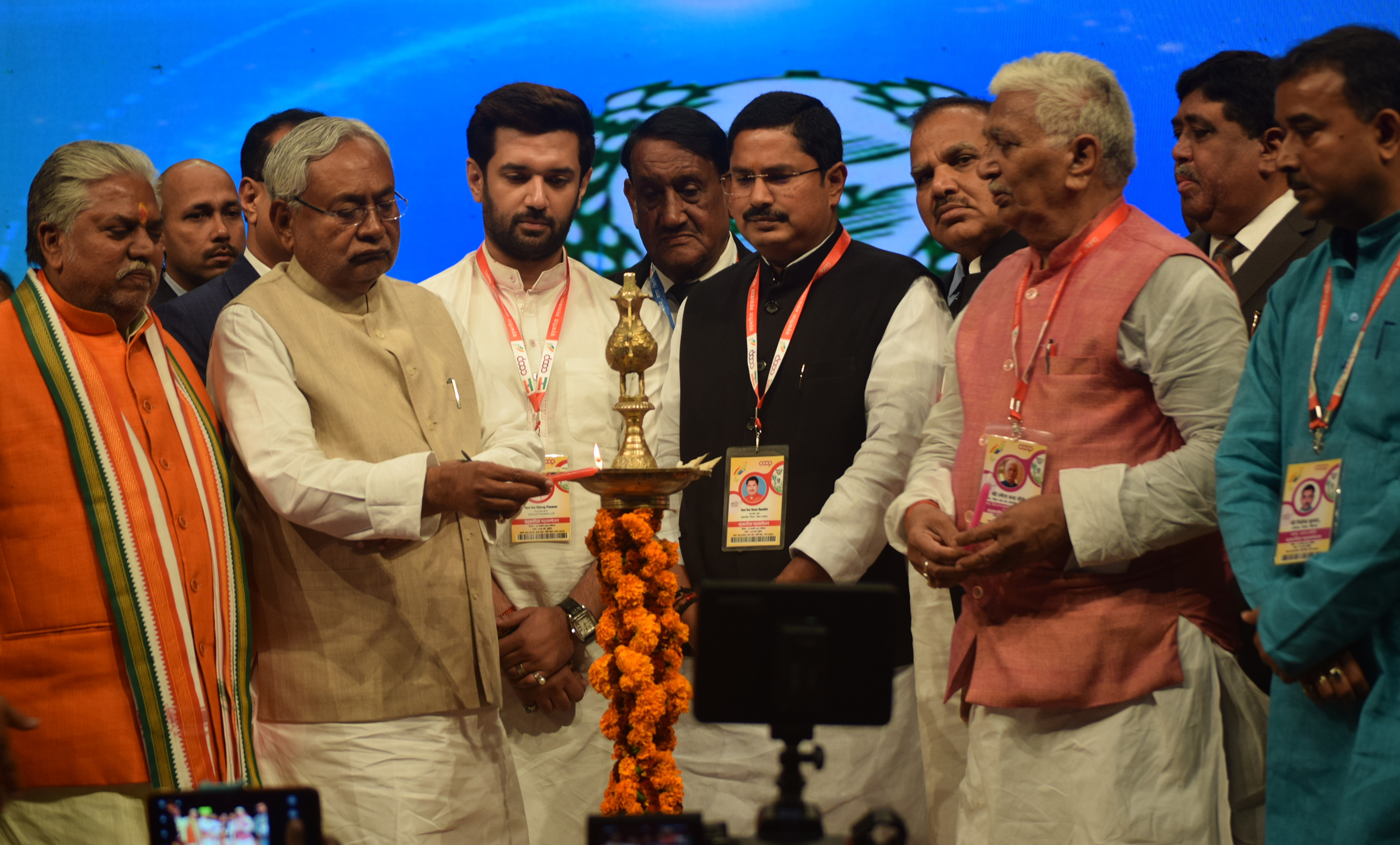 Lighting the lamp and inaugurating the grand event organized by BISCOMAUN, Nitish said “it was a great pleasure to meet some of the cooperators such as Dr Awasthi and Chandra Pal after 20 years and they would vouch for me that whenever they demanded more autonomy for cooperatives I stood with them”. Even today I promise to support the cooperative movement in any shape or form possible, the CM underlined.

Nitish, who had come for just one hour stayed longer and was impressed to see Bapu Sabhagar overflowing with cooperators. Lauding Biscomaun Chairman Sunil Singh he said that his work for farmers cannot be underestimated.

Interestingly, the Chief Minister kind of offered reassurance to the Biscomaun Chairman saying he had never discriminated between a JDU cooperator or an RJD cooperator. Obliquely , the CM said though Sunil Singh is a Laloo supporter he does not have to fear anything. “I value cooperators more than their political affiliation, Nitish said.

Co-operatives play an important role and through them I wish to spread the massage of Jal-Jeevan-Haryali, said the CM noting that the average rainfall is dwindling in the state leading to a reduced water level. Jeevan (life) depends on Jal(water) and Haryali (environment), he said correcting the organizers who were using the slogan rather wrongly.

Listing his achievements in the field of cooperatives in the state Nitish said there are 1.20 crore PACS members today and there is reservation for 35% for women in PACS. PACS are also being strengthened through computerization and grant of fund of Rs 15 lakh to buy agri machineries. “You can change the rural economy”, he exhorted PACS members.

As the crowds overflowed and the organizers including Sunil Singh asked people to arrange for more chairs, the CM made a pun and said when there is provision of only 5000 chairs in the auditorium,  how can more chairs be accommodated.

Leave aside the chairs, there was not an inch of space left in India’s largest indoor auditorium Bapu Sabhagar as people jostled with each other to squat at any available place. The CM informed that he got this auditorium made taking inspiration from his China visit.

The Bihar co-op conference had many distinguished speakers but due to a tight schedule of the CM only a few leaders could speak on the occasion. These included the two Ministers Prem Kumar and Rana Randhir Singh, IFFCO MD Dr U S Awasthi, Dileep Sanghani, Ramesh Chaubey

While NCUI President Dr Chandra Pal Singh Yadav presided over the meeting and delivered an energetic speech, Sunil Singh was in his element exuding wit and management skills.

Cooperators also lauded Biscomaun for arranging seats at the dais for all the Chairmen and MDs of national federations with the Chief Minister. “Though I could not get a chance to highlight our sector’s woes but I am happy that we were seated with the CM”, said Fishcopfed Chairman T Dora Prasad.

The event also had its fair share of cultural items with the Neelam Chaudhary team presenting scintillating Ganesh Vandana. Sahakari geet and other interesting theme-based performances, and regaling the audience. 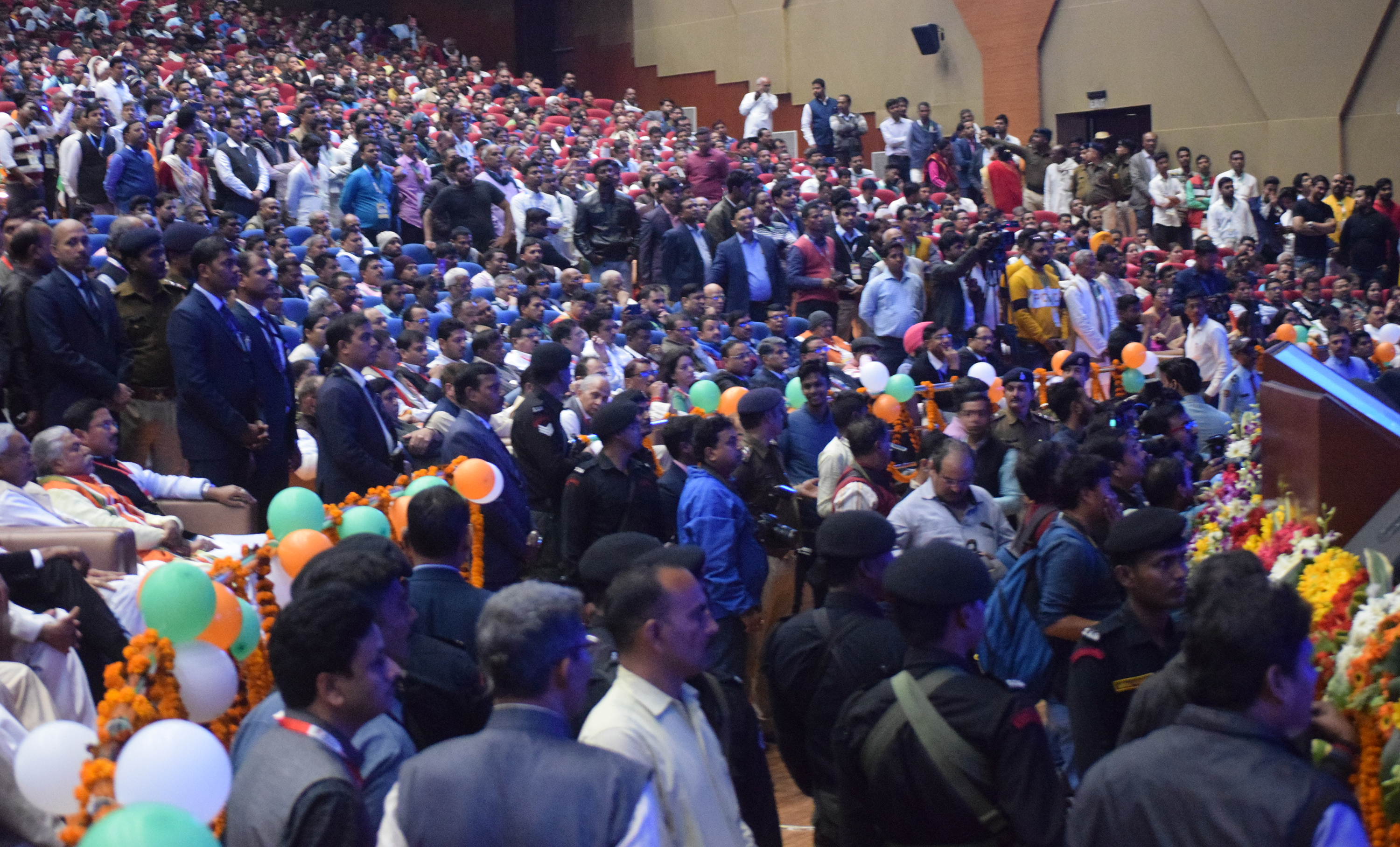