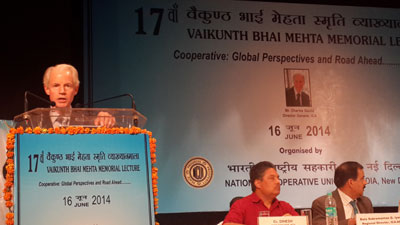 Vaikunthbhia Mehta, the doyen of Indian Cooperative movement stands with Raifferisen in Germany, Desjardins in Canada and Toyohiko Kagawaa in Japan in impacting peoples’ life with their passion for cooperative not only in countries they belonged but also in the wider world. Mr Charles Gould, D G of ICA was speaking on the occasion of 17th Vaikunthbhai Mehta lecture at NCUI Auditorium in N Delhi on Monday.

There is continuity in the cooperative history and the inspiration passes from generation to generations and from country to country. Mehta’s idea of cooperative was certainly tagged in part with the vision of India, Gould said with the audience hearing him in rapt attention.

“I wonder if Mr Mehta imagined, at the end of his life, that the Indian cooperative movement would reach the domestic and global level it has today. Referring to IFFCO he said that by including a new measure to discover Global 300 top cooperatives of the world we were surprised to find it is here in India, the largest farmers’ cooperative IFFCO”, Mr Gould said. Newly elected Chairman of IFFCO Mr Balvinder Nakia who was present on the dais heard him in rapt attention.

More than 400 cooperative representatives from national and state federations attended the lecturer.

Mr Gould said today we need value-based model like cooperatives which can apply local solutions to global problems. He also said that cooperative model solves the problem of members, instead of making money for shareholders as is found in private enterprises.

Mr.Gould also drew attention of the delegates to the ICA Blueprint for Cooperative Decade. The Blueprint talks of cooperatives becoming the fastest-growing model of enterprise by the end of the decade. For this the cooperatives need to differentiate from other models of business, focus on sustainability and build up shared global identity.

Dr. Dinesh, Chief Executive, NCUI proposed vote of thanks on the occasion. 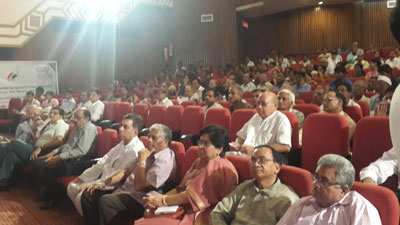