Uttarakhand: Did Modi give cheque before formal approval?

by Ajay Jha
in Agriculture, Featured
0

Despite the NDA govt being on a strong wicket due to Prime Minister Narendra Modi’s spectacular handling of Indo-Pak standoff, its ministers cut a sorry figure when it comes to taking credit. The case in point is the news item related to Union Agriculture Minister Radha Mohan Singh and integrated co-operative development project in Uttarakhand.

On February 14- nearly a month ago Indian Cooperative front-paged a story titled “Modi to handover NCDC cheque to CM Rawat today”. The story read – National Cooperative Development Cooperation is back in the news once again as Prime Minister, Narendra Modi has decided to hand over NCDC’s cheque of Rs 100 crore to the Chief Minister of Uttarakhand. 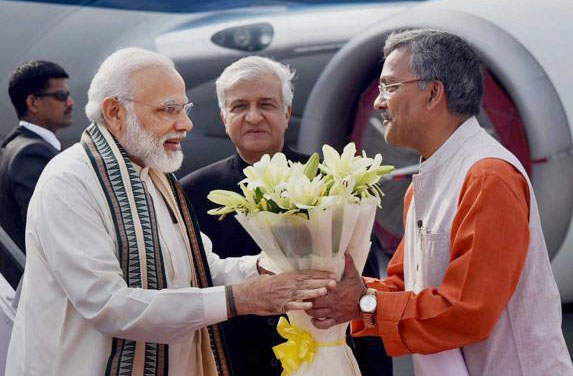 Chief Minister! Did he give the cheque without it going through the formalities of approval? Impossible.

Informed sources say PM’s Rs 100 cr cheque was part of this very Rs 3,340 package. “In fact, PM was roped in so that the proposal gets through sooner than later”, says the source.

Political pundits say the BJP govt is eager to make a political capital out of the same situation again and again. “This is an election year; don’t forget”, they remind.

Soon after the so-called approval last Friday CM Rawat is quoted saying “the implementation of the integrated co-operative development project will improve the economy of farmers in Uttarakhand and help prevent migrations from remote hill areas by promoting farming, horticulture, animal husbandry, fisheries and related activities”.

Under this scheme of the Uttarakhand Government, multi-purpose loans of up to one lakh rupees will be made available to the farmers at a negligible interest rate of 2 percent. The scheme is an important step towards the goal of doubling the income of farmers in the State by 2022.