Document titled “NCDC in Sikkim” released by CM on the occasion

by Staff Reporter
in Featured, NCDC
0

With the intention of strengthening the cooperative movement at the grass roots level by undertaking a host of projects in Sikkim, NCDC MD Sundeep Nayak met its Chief Minister Sikkim Prem Singh Tamang last week at the Sikkim House, New Delhi.

Attended by senior officials from Govt of Sikkim and from NCDC, the meeting between Tamang and Nayak saw the release of a document “NCDC in Sikkim”, which was a blueprint for various project NCDC aims to take up in the state. The document was released by the Chief Minister himself on the occasion, said a media release from the NCDC.

A presentation on the NCDC, its schemes, strategy to develop cooperatives with special focus on opportunities and possibilities to finance projects of Rs.3000 crore for Sikkim for cooperatives was made by the MD, NCDC.

In the deliberations, the MD, NCDC highlighted the mega projects by his organization in the recent past for Dairy, Piggery and other Livestock projects in the North-Eastern states of Meghalaya and Nagaland with the support of state governments.

Nayak also mooted the idea of Sikkim joining NEDAC before the Chief Minister. Highlighting its edge in organic farming, he said, the state can exploit this tie-up for marketing and branding of organic products among ASEAN countries for high value realization. NEDAC is an international platform for Asia and Pacific countries for strengthening agricultural cooperatives, the MD stated.

Listening patently Chief Minister Tamang agreed to the observations of the MD, NCDC and highlighted that the areas of the tourism especially home stay, fisheries particularly trout fish, dairy, marketing of organic agriculture products like honey, ginger, cardamom are the immediate priorities and focus areas of the state govt.

The state govt has already initiated a scheme to incentivize the farmers to increase production in fisheries, dairy and agriculture. He expressed his keen desire to seek appropriate financial assistance for scaling up of these activities from NCDC being Govt of India statutory organisation.

He also showed his interest in an MoU with NCDC to be finalized before budget so that adequate provisions can be kept in the state budget to implement the identified activities in cooperatives through the NCDC lending.

Tamang suggested holding a meeting in Sikkim shortly with the Chief Secretary and his team of Head of relevant departments and the MD, NCDC to work out the specific plans for cooperative development and associated lending by NCDC.

It was brought out by Chief Minister Shri Prem Singh Tamang that believing that ‘seeing is believing’ Tamang felt a team of senior officials and personnel from the cooperative sector of the state may be taken on field visits to Kerala, Karnataka and Andhra Pradesh to study successful cooperative societies in the priority areas for possibilities of cooperative development in Sikkim. 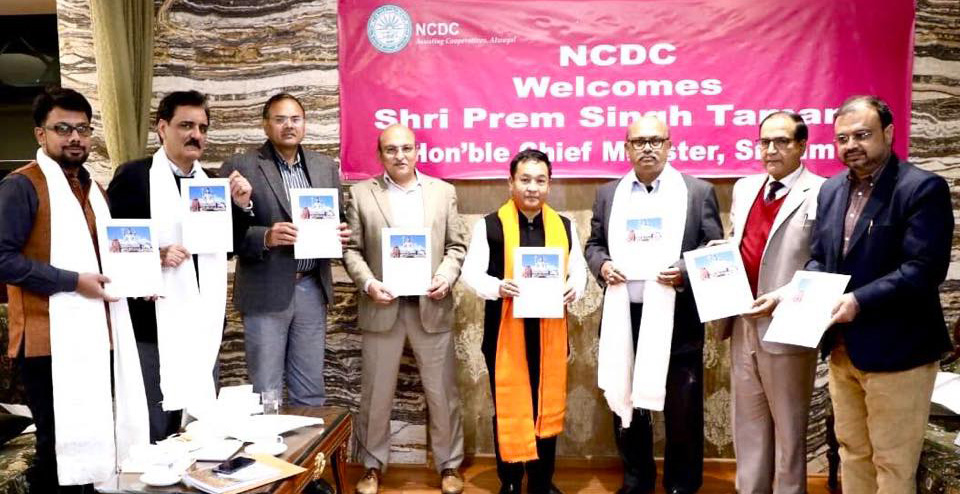