Gujcomasol Chairman and veteran cooperator from Gujarat Dileepbhai Sanghani will contest from Dhari- an Assembly constituency located in Amreli District of the state. Sanghani’s name figured in the first list of candidates announced by BJP high command.

BJP replaced sitting MLA Nalin Kotadiya and has fielded Dileepbhai Sanghani from Dhari. Sanghani is believed to wield considerable clout in the region. Gujarat Legislative Assembly polls are to be held in two phases on December 9 and 14.

An enthusiastic Sanghani said to this correspondent on phone “As the party wants me to contest from ‘Dhari’ and I would put in my best and would start campaigning in the constituency  soon after filling the nomination”. 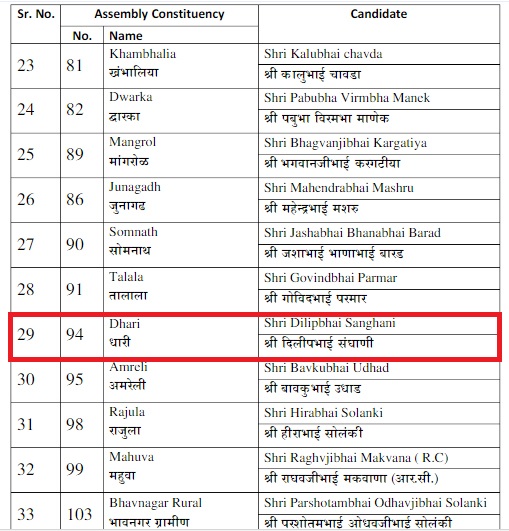 announced”, Sanghani added. There are about 2.1 lakh voters in this constituency and 30 percent of the total population belongs to Patidar Samaj.

Cooperative bodies are a force in Gujarat and the two parties- BJP and Congress are eager to exploit their cooperative connections to win the elections. It is said that if Sanghani wins, he is sure to get a Cabinet birth and would get Cooperation ministry for sure, add his friends. Sanghani was in the erstwhile Cabinet overseeing more than five ministries when Narendra Modi was the Chief Minister.

Held as a problematic seat Nalinbhai Nanjibhai Kotadiya had won from Dhari in the last election. But as his party-Gujarat Parivartan Party merged with BJP, Sanghani was brought in this time, adds source.

“I met people of Dhari during Gujarat Gaurav Yatra, said Sanghani and I am sure to get their blessings once again”, said Sanghani to this correspondent.

Sanghani was elected MLA from Amreli three times in the past. He was also elected Member of Parliament from Amreli for four terms. He was also a Cabinet Minister in 2007 with Narendra Modi as the Chief Minister.

Besides Gujcomasol, Dileep Sanghani is also heading the apex body of state cooperative banks NAFSCOB and is Vice-Chairman of NAFED.