The pics and the note were received from Pramod Samar who is the National Secretary of Sahakar Bharati. Having worked with the Lok Sabha Speaker Om Birla in the past, Samar became emotional when the former was unanimously elected to the top post.

“I had a chance to work closely with my close friend Om Birla in the past. He was Chairman of Udaipur Upbhokta Sahakari Bhandar as well as BJYM President of Udaipur district. I was his deputy and worked as Vice-President”,said Pramod Samar, National Secretary of Sahakar Bharati.

Later, we were together as Om Birlaji rose to head CONFED-the apex consumer co-operative of Rajasthan. He also made it to the board of national apex consumer co-op body NCCF and ended up as its Vice-Chairman. I had a chance here also to work with him”, writes Samar recalling old times.

A determined champion of cooperative conferences and workshops, Om Birlaji would always be ready to further 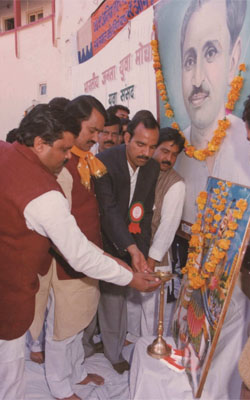 “For cooperators of the country, no news could be bigger than the fact that today he stands as the mukhiya of democratic temple (Lok Sabha)”, writes Samar. “I extend my good wishes on behalf of the entire cooperative fraternity to Om Birla on his elevation as the Speaker of Lok  Sabha”, he concludes.

Om Birla a two-time MP from Rajasthan has replaced Mrs Sumitra Mahajanas the Speaker of the 17th Lok Sabha. Prime Minister Narendra Modi heaped praises on his style of working on the first day of the session.