Fingers crossed as last round slated in Bangkok this week

by Ajay Jha
in Dairy, Featured
0

Indian stand on the RCEP deal got highest attention this week when Prime Minister Narendra Modi held a meeting on the issue with senior colleagues of his Cabinet. What transpired in the meeting is yet not known but dairy is believed to have been kept out of the RCEP negotiations.

“This is the meeting which will decide whether we are in or out of RCEP,” a government official said under condition of anonymity, quotes a media report. A person with knowledge of the deliberations said political compulsions may force India to at least keep the dairy sector out of the RCEP deal, says the report.

While briefing media on the IICTF kick off slated for October 11, Farmers’ Welfare Minister Narendra Singh Tomar said dairy farmers’ interest would be protected at all cost. “We have given our opinion to the Commerce Ministry in this regard”, Tomar said. The final round of negotiations on the RCEP regime is slated later this week in Bangkok.

So politically sensitive is the issue that even Amit Shah is said to have held a meeting on the issue with finance minister Nirmala Sitharaman, trade minister Piyush Goyal, external affairs minister S. Jaishankar and minister of state for commerce Hardeep Puri.

Amul, the taste of India and the pride of the dairy co-op movement has been spearheading the campaign against allowing dairy import. R S Sodhi, GCMMF’s Managing Director has presented his case in several fora ever since the RCEP negotiations began.

Claiming to have 40 years of experience, of which 30 year with the Milk Man of India Dr V G Kurien in the dairy industry, Sodhi has told that if dairy is kept part of the deal, 50 crore of Indian farmers are going to be affected 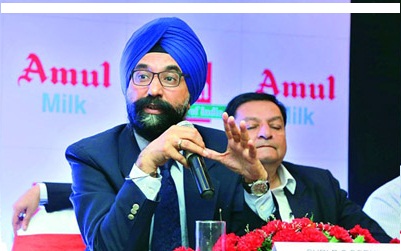 indirectly and 10 crore directly. “The move would indeed help double farmers’ income but alas! It would be 10 thousand farmers of New Zealand”, Sodhi tweeted earlier making a pun.

Amul has also tried its best to expose the clever argument of New Zealand which talks of seeking export of its just 5% of output. “How damaging could be even this 5 percent could be understood from the fact that 5% of total NZ exports of 34,47,000 (almost 35 lac MTs) to India is 1.72 lac MTs, which is almost one third of the total domestic production. Thus, India, will in effect, be surrendering 1/3rd of their total market to New Zealand”, Sodhi said.