PM responds to Amul birthday wish with pun and gaiety!

by Ajay Jha
in Dairy
0

Indian Cooperative had done a piece detailing how cooperatives and their leaders have wished the Prime Minister on his 69th birth day. Prime Minister Narendra Modi has taken time off from his busy schedule to respond to Amul’s birth day wish.

And Modi responded playfully and with an interesting pun “Happy to see India’s leading dairy preparing an Indian leader’s diary”, hinting at the fact that Amul Topicals have an uncanny knack of revealing the hidden story of a news item without sparing anyone.

As reported earlier in these columns, Amul had tweeted a video film of all topicals which it had brought in the past, encapsulating achievements of Narendra Modi as the PM.

The film displayed various themes and portrayed Modi as the statesman. It obliquely said how Modi made China lose its sleep over Dokhlam, how he consoled Sivan on the failure of Chandrayan 2 or how he is concerned over the global warming, for that matter. 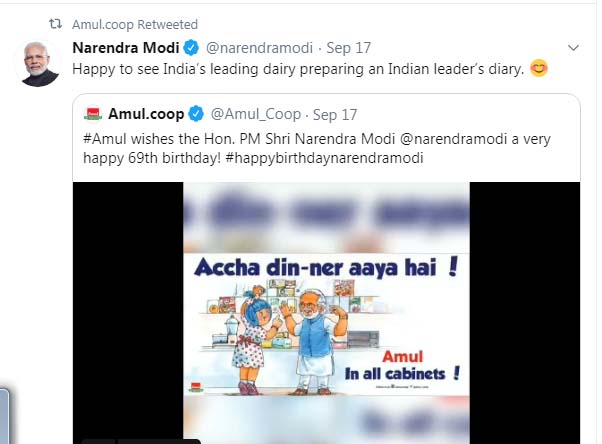 The Amul film on Modi has, meanwhile gone viral with netizens sharing it enthusiastically.

The inaugural event of the campaign was held in Muraina, Madhya Pradesh in the presence of Narendra Singh Tomar, Union Minister of Agriculture & Farmers Welfare and Minister of Rural Development. The campaign was organized in tandem with Kisan Vikas Kendras across India.

All state offices of IFFCO actively participated in the event and planted close to 7 lakh trees, a record in planting these many trees in a single day by an organization across India.