There are reports of firing at a Biscomaun selling counter in Kaimur where the crowds to buy urea became uncontrollable. According to a report, a group of people from the two neighboring villages clashed in which fire-arms were used, leading to injury to nine farmers.

Even as the injured farmers were being shifted to Varanasi for the treatment, Biscomaun Chairman announced monetary assistance to the tune of Rs 50 thousand to the injured. Those who have got minor injury would get Rs 25,000, informed the Chairman.

The Biscomaun team also visited the villages of injured persons, claims Sunil. Those who will get money include Rakesh Kumar Yadav, Sunil Kumar Singh of Silondha, Rafiq Ansari, Shive Kumar Chaubey of Katra Kala, among others. 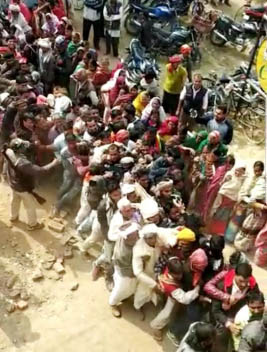 “I have talked to the IFFCO Marketing Director Yogendra Kumar who has promised to send additional racks of urea for the state”, said Sunil Singh Chairman of Biscomaun asking the farmers not to wage bloody fights for the urea.

Biscomaun’s efforts to tackle the urea crisis situation has earned praise from various quarters. Farmers of the state gear up early morning to go to the Biscomaun sale counters where the price is Rs 265 per bag. At other places the price per bag could be anything from Rs 350 to Rs 500.

Biscomaun has also advertised phone numbers for lodging complaint in case of any breach in the price-line. Chairman himself monitors the phone lines. Urea has become a talking point not only in Bihar but in the rest of India in recent months.