A graduate of BITS Pilani Tarun Bhargava has leant the nuances of cooperative well in a short span of time. In his presentation at the 10th Asia-Pacific Co-operative Ministers’ Conference in Hanoi Bhargava made a reference to IFFCO MD’s rural trips for a full year and meeting zillions of farmers that evoked interest and disbelief among the international audience.

Like Vivekanand’s legendary speech in Chicago , Tarun became star overnight as media rushed to know from him more about Awasthi’s Connect Farmers’ Campaign. Among others, Vietanam TV interviewed him extensively. Tarun later tweeted” Interviewed by Vietnam TV for work done for Farmers and Cooperators by IFFCO.”

In his presentation Tarun talked about the great digital push IFFCO is advocating these days. He mentioned the 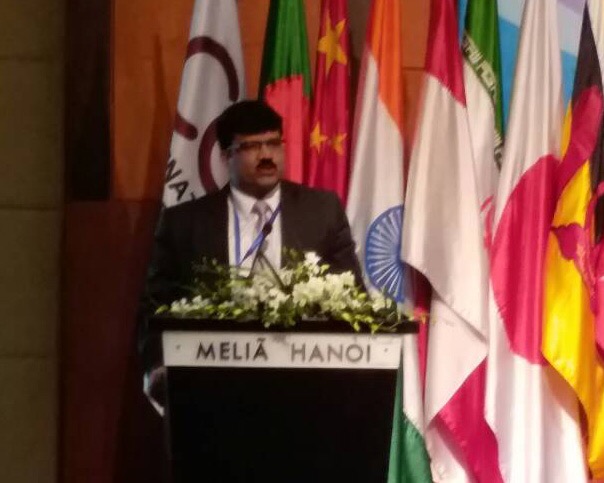 latest Indian Cooperative Digital Platform and its wider ramifications for the farmers of the country in times to come.

Underling the vision of MD Dr U S Awasthi , IFFCO ‘s cooperative development official said IFFCO is spearheading a movement to draw a maximum number of women and youth to the cooperative movement.

Encouraged by his speech Charles Gould the Director General of global body ICA tweeted that the Ministers of Asia-Pacific countries have learnt firsthand about the unique rural trips being undertaken by Dr U S Awasthi.

In his tweet Gould said” AP Ministers learn of @drusawasthi year-long visit to farmers across India#50yearsofIFFCO”.

It bears recall that Tarun Bharagva, though a trained engineer was put in the job of cooperative development after Dr G N Saxena retired. “It was Awasthi’s uncanny sense of recognizing the right human material that Tarun is on the job where you see him today,” said an admirer of Dr Awasthi noting Tarun’s performance at the Ministers’ Conference.

Kangra Central Co-op Bank bid to reach out to villages