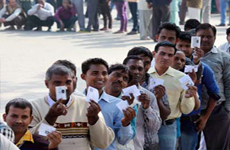 The second-phase elections to 480 primary cooperative societies on Sunday passed off peacefully, according to State Cooperative Election Commission (SCEC) in Bhubaneswar.

“There was no report of any untoward incident,” said SCEC secretary R P Das. Elections to select urban cooperative banks in Puri, Cuttack, Berhampur, Rourkela and Kendrapada were held during the second phase, he said, adding, the results were declared subsequently, according to a report in TOI.

Over 98,000 members were elected to the management committees of 6,586 primary cooperative societies after the two phases. Among them, 81,000 were elected unopposed to 5,437 societies. Every society picked maximum 15 members.

Official sources said the commission had initially announced elections to 7,073 societies, but 487 societies did not go to polls for different reasons. The president and vice-president of each society will be elected 17 days after the elections.