With head under Umbrella, Nafcub AGM ends on upbeat note!

The apex body of urban cooperative banks NAFCUB held its 43rd AGM at the NCUI headquarters in Delhi on Saturday in which leaders after leaders demanded a roll back of income tax on cooperatives especially in the light of Union Minister Nirmala Sitharaman reducing the corporate tax on companies.

Addressing a packed auditorium with UCB cooperators and officers from across the country, Nafcub President Jyotindra Mehta said “enough is enough and we have now penned the last letter to RBI telling it that if it does not heed us we have no option but to take to a legal recourse.”

Mehta was referring to the BoD/BoM issue and said that for the past three and a half years the activities of UCBs have come to a standstill for want of the permission to open new branches. He said ”we have even demanded them to at least spare unit banks numbering 392 and tier-1 UCBs but to no avail.”

Comparing the NPAs of UCBs with commercial banks, Mehta felt that the hackneyed argument of professionalism being advanced for the former is hogwash. The average NPAs of UCBs are 7.1 % while that of PSU banks’ are at 11.2%, he said. There are banks in the PSU sector which have NPAs to the tune of 20% and more, he added citing names of such PSU banks.

Mehta also assured the audience that the Nafcub board would leave no stone unturned to take everybody on board for the resolution. ‘Since Amit Shah is from the cooperative sector he knows our issues better and shortly we would meet him as well”, he added.

But he also welcomed the RBI’s go-ahead for Nafcub for forming Umbrella Organization and called it a game-changer. “We have received a letter dated 6 June from RBI which has stipulated certain conditions under which

Nafcub could go ahead with the formation of UO- a dream for the sector, Mehta announced to thunderous applause from the audience.

Mehta informed that the process of setting up UO is underway and the details are being worked out. Later V S Das, Ex-ED of RBI made a presentation on the subject.

Speaking after Mehta H K Patil, Chairman Emeritus of Nafcub dittoed Mehta and said UO is like a dream come true. “It is a proud moment as we are on the verge of realizing our dream”, Patil said. Lauding the performance of the sector in general Patil, however wanted the UCB sector to reduce its NPA further from 7% to 5% before the next AGM.

Appreciating Mehta and the team for all the efforts to make UO a reality, Patil wanted everyone to support the concept of UO. “We are a 600 thousand lakh strong sector but being scattered we are not taken seriously; here is a chance to unite under one umbrella”, Patil stated. 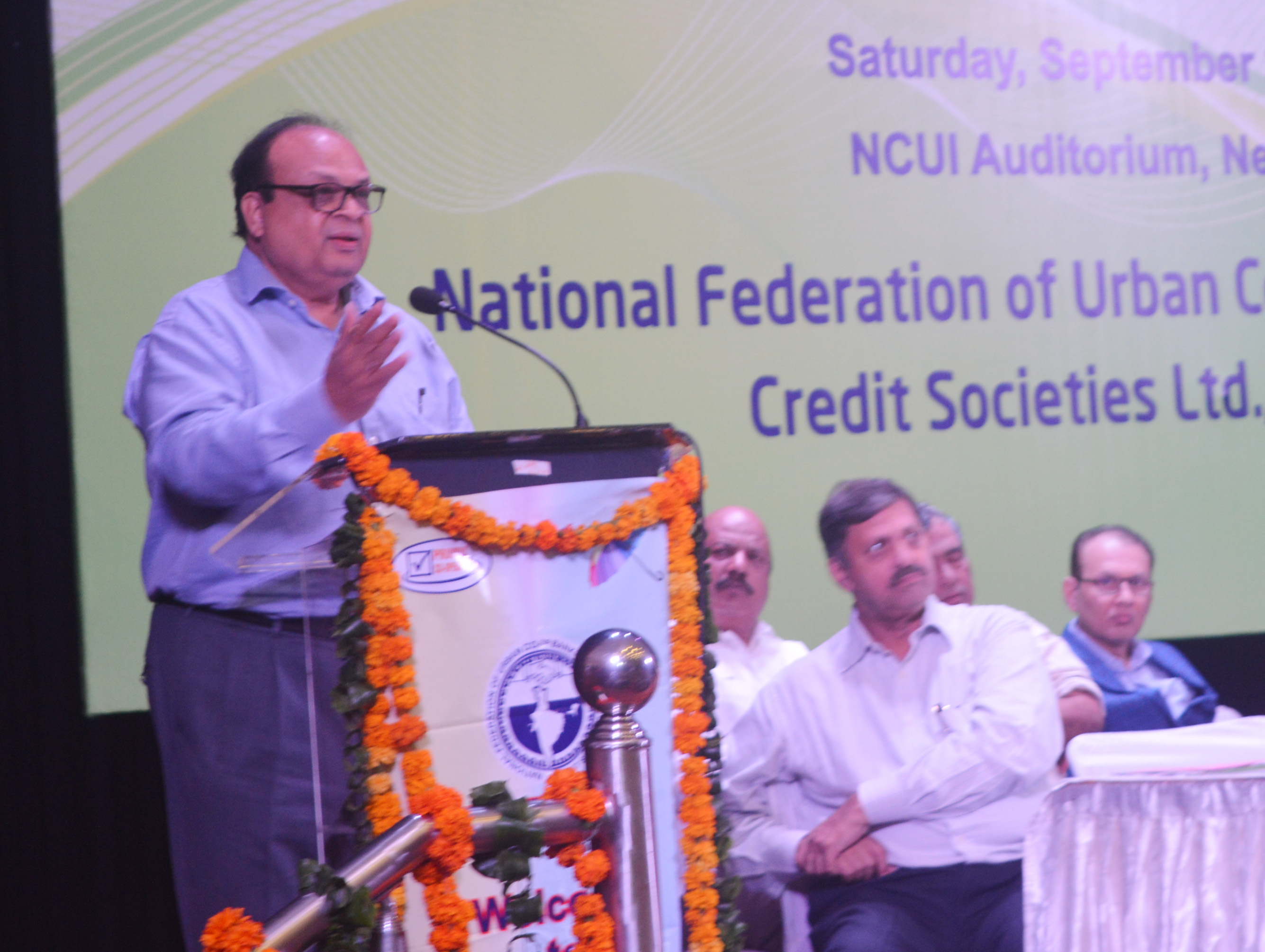 Later NAFCUB AGM passed a resolution for reduction in Income Tax that sought a parity with the Corporate tax. “It was passed in our board meeting on Friday and we wish to pass it in the AGM”, said Nafcub President.

V S Das made a presentation on the upcoming Umbrella Organization detailing the conditions stipulated by RBI such as membership to UO would be voluntary. “UO would be registered as NBFC which would be converted into a bank after 4-5 years and after a positive experience”, he said.

Several delegates were however not happy with UO being registered as NBFC and wanted it to be registered under co-op act. Das, Mehta and finally Patil had to intervene one by one convincing delegates of the compulsion of registering UO under Company Act. “We tried our best but we had no chance and we would ensure that it is not monopolized by any one big group as we will have differential share”, Mehta made efforts to convince the delegates.

The Nafcub AGM had also some first timers including Saraswat Bank Chairman Gautam Thakur, Uday Joshi and others. It bears recall that Gautam Thakur was co-opted by the Board earlier- a move welcomed by many in the sector given his experience of running the largest UCB in the country successfully.