In a free-wheeling chat in the wake of the NAFCUB election results, Chairman of the largest urban cooperative bank in the country Gautam Thakur of Saraswat Bank discussed a host of issues ranging from NAFUB to RBI to the future of UCBs in the country.

On the NAFCUB results, the usually reticent Thakur said “I am both happy and relieved that a competent team has taken over the reins of the apex body and that there would be no more of court cases and internal rivalry”.

The young chairman also said that he personally knows most of the elected Directors and can vouch for them. He lauded H K Patil, Jyotindra Mehta, Vidyadhar Anaskar and others for their unflinching commitment to the cause of the urban cooperative banking sector. “It is a great team that we have got after five years of disturbances”, Thakur stated.

A great votary of democracy in cooperatives, Thakur flew to Delhi on Sunday to exercise his democratic rights at the NAFCUB elections. “As my daughter was a little indisposed I could not overstay to meet everybody”, he explained his brief appearance at the NCUI headquarters on the Election Day.

Thakur was also full of praise for Satish Marathe and called his elevation to the Board of RBI as a big boost for the urban cooperative banking sector. “I talk to Shri Marathe once in a while and find his clarity on the subject of urban co-op banks very reassuring; with people like him on the RBI Board we can feel assured.” 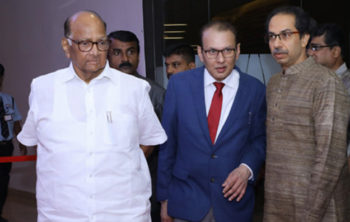 with a group of cooperators and said that the meeting was highly encouraging. “But what struck me in the new Governor was his enormous patience to listen to people. He heard our points of view and assured that each of them would be looked into ” “I also raised the issue of BoM with the Governor and suggested that RBI’s annual certificate to the functioning of an UCB should suffice”, he stated.

Readers may know that the issue of BoM in addition to BoD is being resented by the sector. The matter has acquired urgency in the wake of RBI refusing to give license to UCBs for opening new branches if they fail to have a BoM in place.

Lauding RBI’s role in encouraging UCBs, Gautam Thakur said “it is not so that the whole of RBI is opposed to the sector; there are just a few persons and I would not name them as you are aware of them too”, Thakur underlined.

Reiterating his commitment for the cooperative sector Thakur said a cooperative is fundamentally an organization that works for the common man and this is what makes us comfortable here; I can’t imagine doing anything other than this, he stressed. “The banking done through co-ops is perhaps the best as those giving service and those taking it know each other”, the young Chairman reiterated.

Sketching out the fundamental differences between an UCB and commercial-private banks, Gautam Thakur said that when a staff-member of Telangana or for that matter of Maharashtra gets transferred to other states he has no understanding of local dialects and customers have the issue of communication and trust. “But compare it with urban cooperative banks where the communication is seamless”, Thakur said explaining the reasons of superiority of UCBs over commercial cousins.

It bears recall that his earlier statement “Co-op is in my DNA” had surprised the sector as people felt Saraswat Bank might go the private way. Since then people have come to believe that staying in the co-op fold is his natural call.

Thakur would not admit but there is a murmur of him being co-opted on the NAFCUB Board. Without naming him the newly elected President Jyotindra Mehta seemed to say this much “we wish to involve the largest and the smallest with NAFCUB.