Sahakar Bharati is keeping watch on the development

The finance ministry and RBI officials had three meetings since the PMC Bank crisis and the effort is to bring back the confidence of the depositors in the nation’s banking system, writes PTI quoting finance minister Nirmala Sitharaman.

But the exercise is going to be piecemeal and not earth-shaking, says the Minister. The government is not coming up with a complete solution immediately but it is moving towards ensuring better supervision and regulation for cooperative banks.

“I am not indicating that everything is going to shake up or be disruptive. I am only saying that we are looking at ways to ensure the confidence of the public in banks,” she is quoted saying by the news agency.

Earlier, the Minister had promised that the required amendments for better control of UCBs would be introduced in the winter session.

The experts wonder if the cosmetic make-over will bring about the much-required change where one can feel his money is safe in an urban cooperative bank. As late as on Wednesday RBI has imposed a hefty fine of Rs 5 crore on Mehsana Urban Co-op Bank for failing to adhere to its guidelines on issues of loans to Directors’ relatives, among others.

Earlier, two banks of Maharashtra were fined in lakhs for similar kinds of flouting of the RBI guidelines. And unfortunately, such incidents are not few and far between.

While the details of the discussion (sadly no co-operator is part of this committee which only has officers from the RBI and the Finance Ministry) is not yet clear, sources say the RBI is seeking to acquire more supervisory powers.

Satish Marathe, RBI Director and one of the members of delegation that met Union Finance Minister, adds that Sahakar Bharati is keeping a close watch on the development. “We are following the case and we have in fact 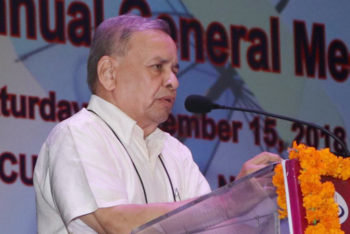 also talked to the Minister about this on phone”, said Marathe asking the reporter to wait for a while for the full picture.

“I would be in Delhi on 13th November and would meet you in the evening to brief you about the development”, Marathe assured this correspondent.

It bears recall that Sahakar Bharati has met the Union Finance Minister and requested her to make UCBs a part of the Indian financial system as any other. It also demanded a Cell or a Desk be created for Cooperative Financial Institutions in the Department of Banking and Finance Services, Ministry of Finance.

Its request of inclusion of at least one person from the co-op sector in the Committee seems to have fallen on deaf ears. The other issues Sahakar Bharati batted for was amendment in the BR Act to provide full regulatory powers to RBI. Simply amending the Multi State Cooperative Societies Act will not be enough, they felt.